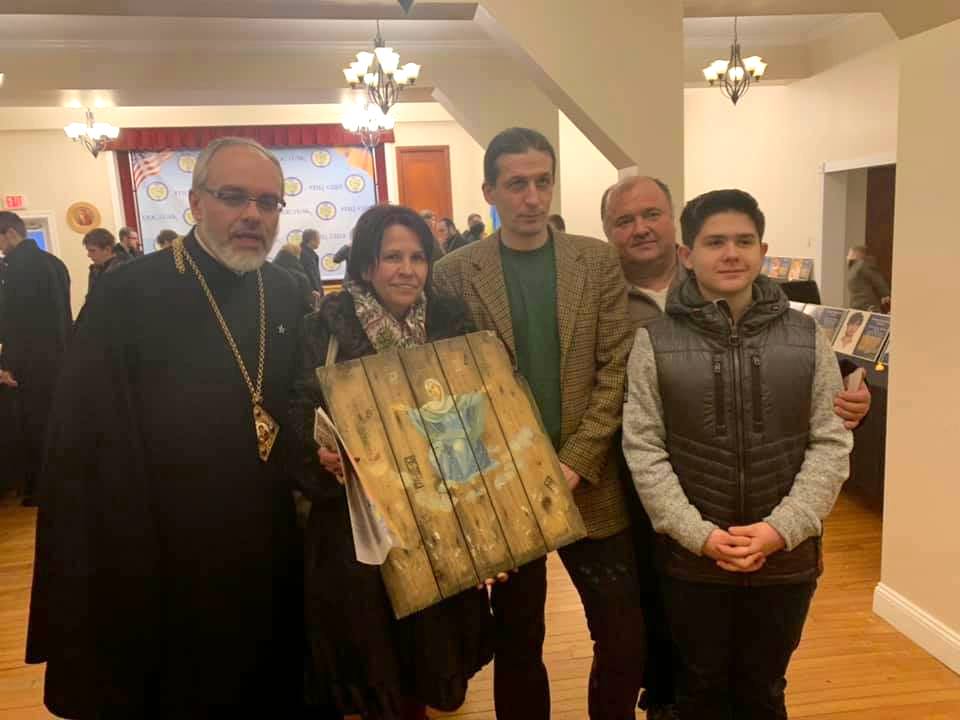 $15,000 for PFVMH operation already raised at Icons on Ammo Boxes exhibitions in US this year

About $15,000 has been received by the Pirogov First Volunteer Mobile Hospital from the sale of Icons on Ammo Boxes during exhibitions in the United States this year, held under the “Buy and Icon – Save a Life” joint project of the PFVMH and artists Sofia Atlantova and Oleksandr Klymenko. The amount seems to be not final since several potential buyers are still considering a purchase of icons.

The exhibitions were held at Indiana University Bloomington, Valparaiso University, Ukrainian parish of Peter and Paul in Chicago, St. Andrew the First-Called Cathedral in South Bound Brook, NJ, and St. Andrew the First-Called Cathedral in the Washington suburb of Silver Spring, MD. PFVMH Supervisory Board Chairman Gennadiy Druzenko participated in the events along with the artists.

According to Oleksandr Klymenko, the exhibitions generated quite an interest and have become the project’s most successful so far. Both Americans of Ukrainian origin and those in no way related to Ukraine came to see the icons. This allowed the organizers and the artists to tell the truth about the war in Ukraine to many people beyond the seas.

“There is no doubt now that the PFVMH will not only financially survive until the Day of Medical Worker in June, repair its worn vehicle fleet, and ‘re-shoe’ it with summer tires but will also be able to implement a few important short-term projects in Eastern Ukraine,” Gennadiy Druzenko commented.

“Buy an Icon – Save a Life” is an art project of Kyivan artists Sofia Atlantova and Oleksandr Klymenko aimed at supporting the PFVMH in employing civilian medics to provide medical care to both militants and civilians in the Anti-Terrorist Operation / Joint Forces Operation zone in Eastern Ukraine. Earlier, exhibitions of icons on ammo boxes, brought from the combat zone, were held in Antwerp, Berlin, Bonn, Brussels, Catania (on Sicily), Cologne, Edmonton, Frankfurt am Main, The Hague, Hanover, Krynica-Zdrój (in Poland), Leipzig, Los Angeles, Lublin, Milan, Munich, Prague, Rome, Toronto, Vienna, Vilnius, Warsaw, and Winnipeg, as well as many Ukrainian cities. Presently, such an exhibition is held in Montreal.

Photo from Facebook of Daniel Zelinsky, Archbishop of the Ukrainian Orthodox Church of the USA, former Exarch of Ecumenical Patriarch Bartholomew in Ukraine.