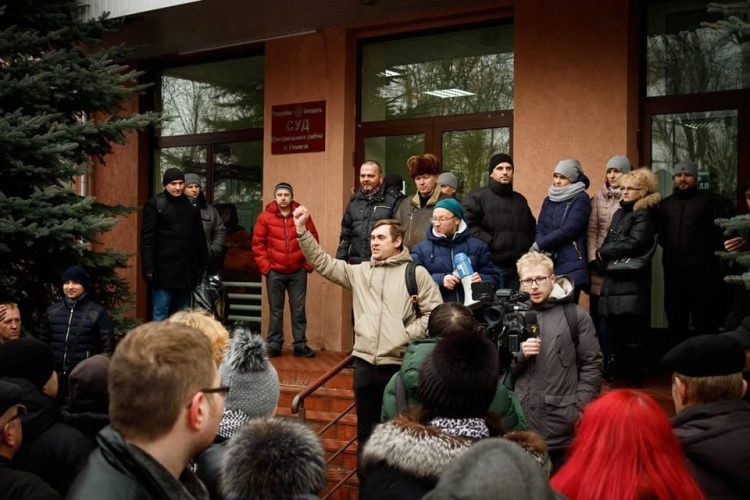 Members of the Pirogov First Volunteer Mobile Hospital were indignant to learn about the sentencing of their Belarusian blood brother – trade union activist Andrey Stryzhak – to 10-day arrest. According to the court of Gomel’s Central District, Andrey Stryzhak participated in an “unauthorized action” that tool place on Feb. 21, 2017 on the steps of this very court. Even the defendant’s absence during the proceedings did not prevent the adjudication.

On that day, according to Andrey, the first trial was held in Gomel against one of participants in the March of Non-spongers, and a decision to be made at this trial could change the lot of all the “non-spongers” in Belarus. About 300 persons came to attend the trial, but the courtroom could accommodate only 38. The “crime” of Andrey was that he, standing on the steps of the court, recited for the people outside quotes from the proceedings communicated to him by the people inside the courtroom!

Andrey is preparing to appeal against this judgment and needs our support. In the difficult time for Ukraine, he supported our country. It is thanks to his active stance that the PFVMH received from our Belarusian brothers medical vehicles, which has allowed our volunteer medics to provide timely medical aid to thousands of Ukrainians, saving their lives and health. Now it is our turn to repay our debt!

We appeal to the Parliamentary group of MPs for interparliamentary relations with the Republic of Belarus: please apply your influence and authority and draw attention of your Belarusian counterparts to this flagrant violation of human rights! In the 21st century, it cannot be a crime in a country in the very heart of Europe when a person retells the progress of judicial proceeding to people who were not able to get into the courtroom.

We call on civil society organizations in Ukraine and Belarus and all those concerned to support our appeal!