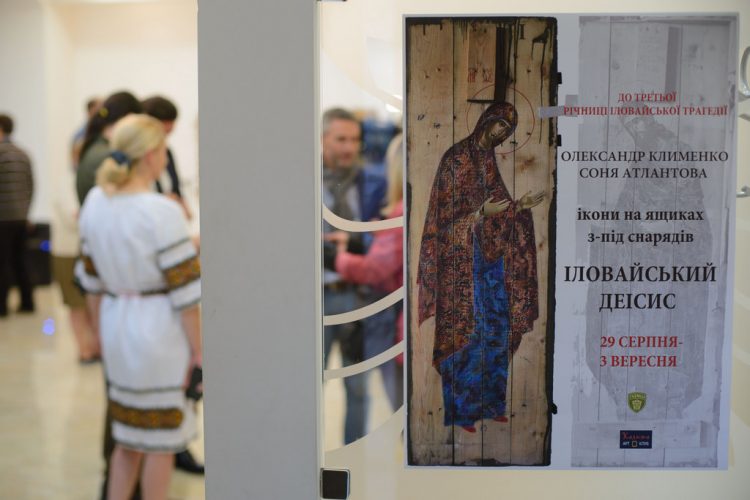 On August 29, three years after the Ilovaysk Massacre, artists Sonya Atlantova and Oleksandr Klymenko presented their new cycle of works “Ilovaysk Deisis.” The Movement of Valentyn Nalyvaychenko “Spravedlyvist” – a strategic partner of the Pirogov First Volunteer Mobile Hospital – reported on the event on their site in a story “PFVMH: the Art of Volunteering.” Ilovaysk Deisis is part of a lagers-scale art volunteer project, “Icons on Ammo Boxes.” In the last two years it was exhibited in dozens European cities and institutions, including the European Parliament and the Lithuanian Seimas, and has raised nearly UAH 2 million. Sonya Atlantova and Oleksandr Klymenko create icons with colored pencils following the canonical icon-painting technique.

In their exhibition opening announcement, the artists explained that Deisis – supplication in Greek – in iconography is the representation of Christ Pantocrator as the Judge at the Last Judgment accompanied by saints facing Him in a prayer on behalf of humanity. So Ilovaysk Deisis is a present-day interpretation of this iconographic composition. In our case, the saints are supplicating in the first place on behalf of the Ukrainian warriors killed in the Ilovaysk pocket.

“This project says of death and life”, Oleksandr Klymenko said at the opening ceremony. “The ammo boxes are a symbol of death, a symbol of war, whereas icons in Europe and Ukraine are a symbol of life. But everybody wants life to finally beat death, and that is why it moves. People have got accustomed to feel this war through the media, through the Internet. They understand that there is something wrong with this virtual feeling. These icons were brought from there, they breathed the soot of the war, and people can even hold these art objects in their hands.”

Transfiguration has happened to the boxes that bore death earlier. Now they are a form of art. Money raised by the exhibition will be used to support the PFVMH, that is, to help those who fight at the front or live near the front line. It is logical, since the PFVMH began from the terrible statistics of Ilovaysk, when it became clear that every third wounded warrior died there. Just then the volunteer medics mobilized first.

“The project demonstrates humanity. These icons remind us of those killed. Nothing washes land as the blood of the just does,” said PFVMH leader Gennadiy Druzenko at the exhibition opening.

After Ilovaysk, everything took the course of another scenario. Now the world knows what Russia is apt to. The huge price was paid for this knowledge. “Nobody can tell precise losses so far. The Military Prosecutor’s Office has counted 366 killed, 429 wounded and 300 captured soldiers of the Armed Forces of Ukraine, including eight still hold captive. We must remember every warrior. We support the PFVMH, the volunteer medics who [saved lives] in Ilovaysk and right now in Popasna are saving lives of both our warriors at the front and civilian population of Donetsk and Luhansk Oblasts,” Ambassador Markiyan Lubkivsky, Spravedlyvist coordinator, said.

Various people come to the exhibition. Some have learned of the project from Facebook; others wanted to thank the artists and support the PFVMH directly. There were renowned writer Olena Styazhkina from Donetsk, Fulbright Program in Ukraine Director Marta Kolomayets, Ukrainian Greek Catholic Church parson Kostyantyn Panteleyev, kobzar, banduryst, lirnyk and the Chorea Kozacky leader Taras Kompanichenko, as well as diplomats and media people. The icons will be exposed in the KalytaArtClub gallery until Sep. 3.

Photo album “Kyiv, Aug. 29, 2017, KalytaArtClub gallery. Opening of “Ilovaysk Deisis,” an exhibition of icons on fragments of ammo boxes in commemoration of Ukrainian warriors killed in the Battle of Ilovaysk. Authors: Sonya Atlantova and Oleksandr Klymenko”