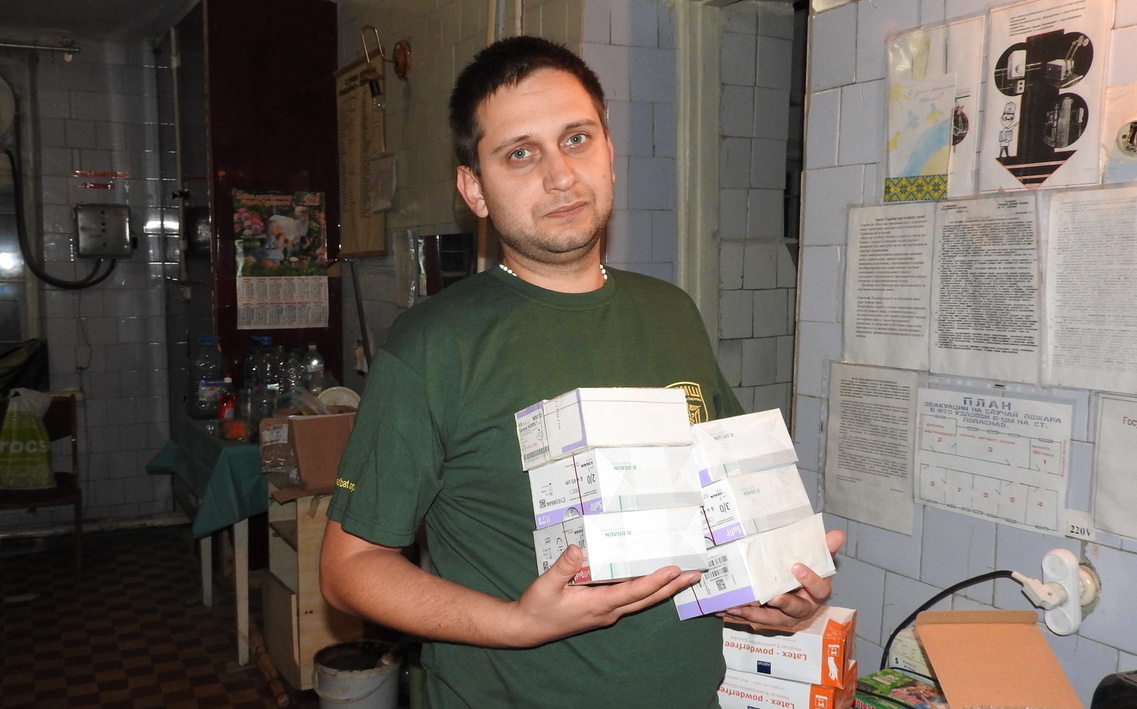 “Banderites” in scrubs or How PFVMH stitches up Ukraine

On Sunday, Oct. 2, scarcely had Dmytro arrived at the Popasna Central District Hospital in Luhansk Oblast when a nurse ran out to the car and asked the new-come volunteer doctor to urgently examine a patient. The patient turned out to be a man of a venerable age, who was brought to the hospital by his son. During the inspection, the doctor asked the old man to lie down for abdominal examination, to which the latter replied in Russian, “What?”

“I repeat: ‘Please lie down, I have to see your belly,'” Dmytro narrates. “And in this moment his son says in Russian, literally: Look, how do you speak? Damned Banderites!”

Dmytro Pozharsky, 27, is a general surgeon of the Pirogov First Volunteer Mobile Hospital (PFVMH). He works at the Dobromyl District Hospital in Lviv Oblast. There, he is both a surgeon and a traumatologist, as well as a combustiologist, urologist and sometimes even oncologist. He graduated from the Lviv National Medical University. For him, speaking Ukrainian is as natural as speaking French for a Frenchman or Polish for a Pole.

While the volunteer doctor was carrying on the examination (“I have not come here to engage in a controversy with them”), nurses and the hospital’s head physician, who stood beside, shamed the old man’s son. Dmytro made a diagnosis, prescribed treatment and sent the patient to the surgical ward to stay under observation, since the laboratory did not work on Sunday and so he could not prove the diagnosis (later, laboratory analyses confirmed the doctor’s conclusion).

“After the examination, I went out to the street to take my things from the car. The son of that old guy came up and apologized in Ukrainian!” Dmytro recollects.

The surgeon from Halychyna speaks Ukrainian on principle. As a rule, it does not give rise to a hostile attitude toward him, rather a wary one. “Sometimes they ask to repeat, and when you repeat, they are getting on. After the conversation, this wary look disappears – people pay attention to how you treat them rather then the language you speak with them,” Dmytro says. Tetiana Kushneruk, PFVMH infectious diseases doctor, who is in the East for the second running mission, holds a similar opinion. Tetiana is the acting head of the ID ward in the Lyubeshiv hospital, Volyn Oblast. She graduated from the Bukovyna State Medical University. While in Luhansk Oblast’s Novoaydar, she heads the ID ward in the local hospital too.

“At first, even the ‘good morning’ greeting in Ukrainian put patients and personnel on the alert. They whispered behind my back, because I am the first infectiologist in the ward who speaks Ukrainian,” Tetiana says.

She told about a patient, mother of four, whom ambulance had delivered in a grave state to the hospital. One of her sons had been killed – he had fought on the side of Russian terrorists in Luhansk Oblast. Another son had been still fighting on the same side – “the good side,” as the woman put it. When she first heard Ukrainian from Tetiana she was apparently scared.

After a week in the hospital, the mother of the son who fights “on the good side” hugged and kissed the doctor from Volyn. “I didn’t think that such doctors would work here,” Tetiana conveys her words.

According to Tetiana, local doctors also cannot understand why PFVMH volunteers go to the East: “They think we are paid big bucks for that. However, as we cooperate, this opinion is changing.”

Now she has very good relations and understanding with her colleagues. “Nobody has yet switched over to Ukrainian but some have already been trying.”

Besides direct provision of medical care to people in Eastern Ukraine, which lacks doctors catastrophically, the PFVMH does two more very important things: destroys the wall of distrust among the Ukrainian easterners and westerners as well as shares experience and knowledge with local medics. “I think the PFVMH will certainly take root here, because we’ve got results,” Tetiana concludes.