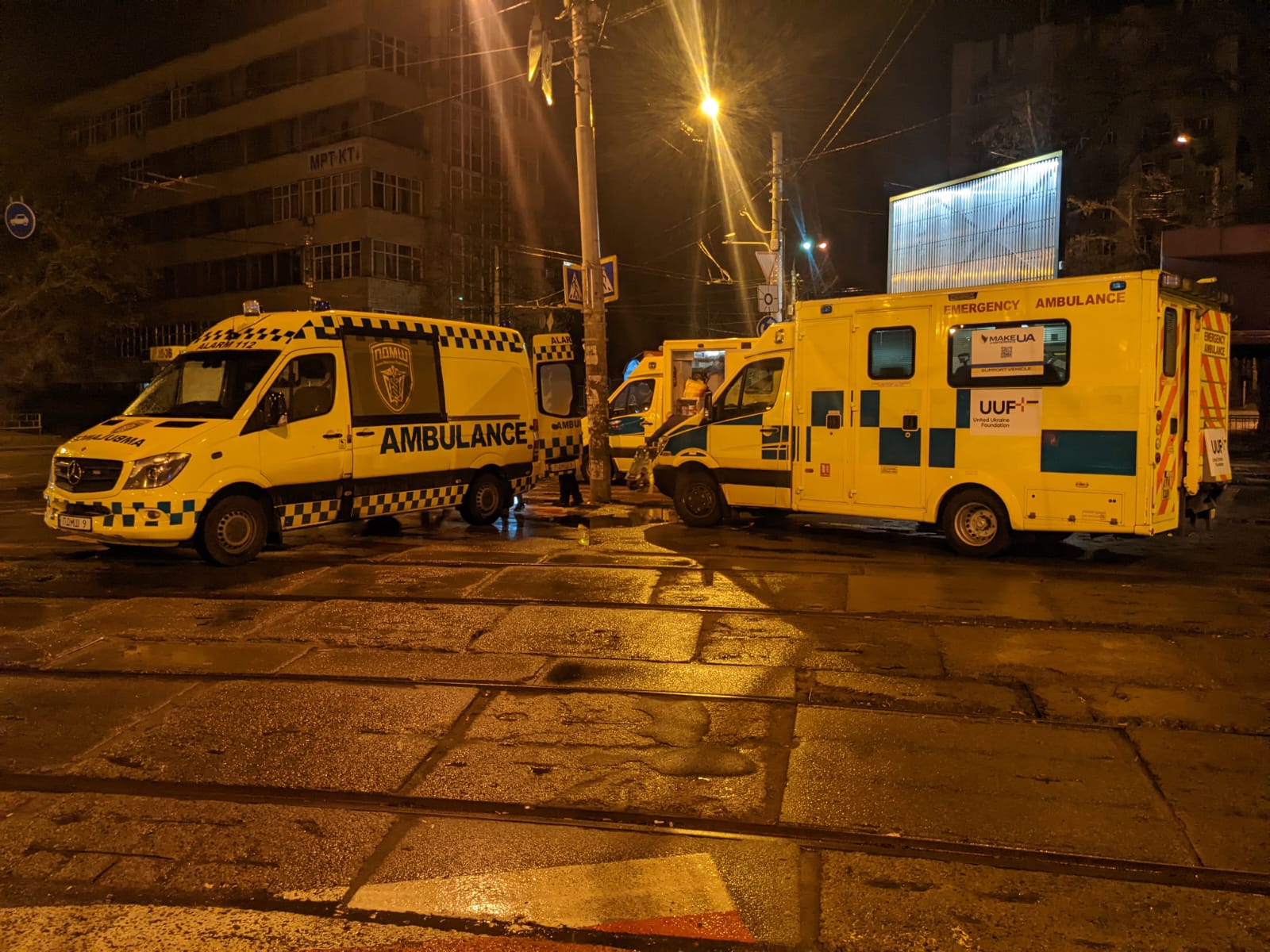 On the eve of the Orthodox Easter holidays, PFVMH received two of the last six ambulances purchased by the United Ukraine Foundation (UUF) and stuffed with medicines and medical equipment in the United Kingdom to support Ukraine. Immediately after the holidays, these ambulances will go eastward.

The two vehicles were driven to Ukraine by an international volunteer team of paramedics: Englishwoman Lucy, Italian Giuseppe, and Portuguese Filipe. The team stayed overnight with Ukrainian volunteer medics in the Pinchuks’ mansion, which PFVMH has lately been using as its base.

“I could not just sit down and watch the news,” Filipe told Inter TV channel reporter in London before departure for Ukraine. “So I started to look for contacts among friends, medics, and organizations. And I was lucky to meet these guys. We joined forces. Now I’m driving these ambulances to where they are needed.”

Filipe, a former Portuguese Air Force medic, has a hot spot operation experience in Kosovo, Bosnia, and Mozambique. He also has 11 years of experience just with the same ambulances as those brought to Kyiv. Even more, he did work in one of these vehicles in Southampton.

Giuseppe’s feelings echo those of his colleague. “I felt that I could not just be watching without doing anything,” he told the PFVMH reporter. So he teamed up with Filipe, and they started collecting ambulance kits and donations.

A medic with special training in responding to terrorist attacks, Giuseppe emphasizes that he was inspired by the action of PFVMH doctor “Corsa” and driver “Kisil” during the evacuation of Irpin filmed by France 24. “I then found out that Alex and Tom, two UUF members in London, bought and fixed two ambulances to donate to any hospital in Ukraine. I suggested donating them to PFVMF. They agreed. We loaded the UUF ambulances with our medical kit and humanitarian donations and drove them here with the help of Lucy.”

Lucy is also a medic with no military experience but relies on Felipe: “Work [in Ukraine] will not in principle differ too much from what we routinely do in ambulances. Of course, there’ll be more work with wounds and blood losses. But we are trained in how to deal with these.”

Today, the British medics delivered training to their Ukrainian colleagues in using their ambulance kits. “There are very highly qualified doctors here with Pirogov [First Volunteer Mobile Hospital] but they may not have the experience to work on an ambulance and use our kit,” says Giuseppe. “This is a great opportunity to exchange and complement each others’ knowledge and experience, from emergency ambulance work to hospital care,” he added.

The ambulances from Britain are second-hand. They were bought with donated money at auctions, where it is only allowed to start the engine to find out if it works. Therefore, each of the vehicles after the purchase was thoroughly checked up and repaired at a service station – free of charge thanks to local UUF volunteers.