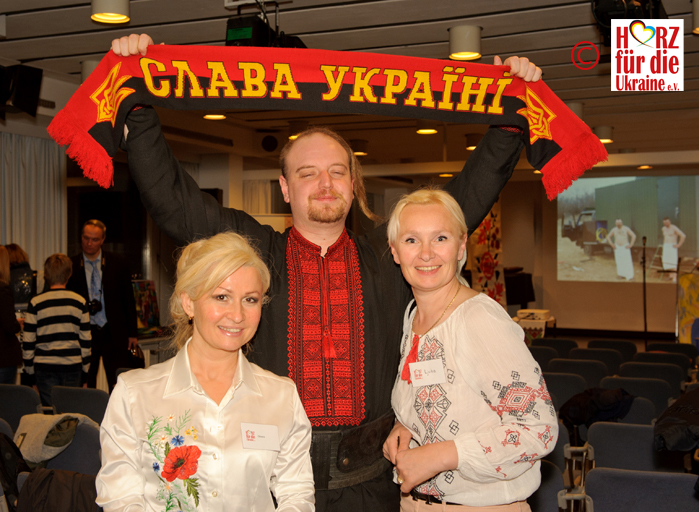 Central European Tour in Support of PFVMH Brings Recognition and over €5,000, Part of Which Will Be Used to Equip a Mobile Dental Office The exhibition in the Czech capital, Prague, on Tuesday wrapped up the Central European tour “Buy an Icon, Support the Hospital” in support of the Pirogov First Volunteer Mobile Hospital. Launched in Polish Lublin in mid April, the exhibition/sale/concert titled “Icons on Ammo Boxes: the Art that Turns Death into Life” has also visited Ukrainian Lviv and German Leipzig, Berlin, Munich, Frankfurt am Main, Hanover, and Schliersee.

Over this period the exhibition organizers managed to raise over €5,000, part of which will be used, in particular, to equip a mobile dental office (able to be transformed into a mobile operating room) based on a Tatra tow truck. According to PFVMH Board of Trustees Chairman Gennadiy Druzenko, he expects that the “dental/operating transformer” will set off for the front as soon as June.

“A goal of any fundraising event is certainly to raise funds,” says Druzenko. “And we have attained this goal, having accumulated during the tour over €5,000. However, the very presentation of the Pirogov First Volunteer Mobile Hospital to our friends in Europe is probably even more important than the funds. We, and the artifacts shown at the exhibition, were not just collecting donations — we witnessed the tragedy and the greatness of what have been going on in Eastern Ukraine for one year now. We were looking for and have found new friends in Europe. They’ve learned about us and believed in us. And this is the most important thing.” Unlike the action in Lublin, where the “commercial component” was in the auction format, the charitable events in other cities were exhibition & sale, though also included a presentation of the hospital and communication with the artists, as well as performance by renowned Ukrainian kobzar, banduryst and lirnyk Taras Kompanichenko. In total, the exposition comprised nearly 40 works by seven artists. After Lublin, a half of the paintings remained in Lviv, in the Sheptytsky National Museum, the rest going on the journey to Germany and finally reuniting in the Czech capital. In late May and in June, such exhibitions are also planned in the Lithuanian Embassy in Ukraine and the European Parliament building in Brussels, Belgium. The main exhibits are icons painted by Sofia Atlantova, Oleksandr Klymenko, and Natalia Volobuyeva on ammo boxes brought from the Anti-Terrorist Operation zone. Despite the very specific material, the art project is antiwar in its essence. The artists decided to combine what is most traditional in the Ukrainian culture — the icon, which for Ukrainians has always been a symbol of peace, humanity, and love — with the artifacts of modern war, thus illustrating the victory of humanism and pacifism over hatred and destruction.

The project is also a kind of attempt to interpret the Ukrainian history over the last thousand years in the context of the war in Donbas, an endeavor to find ways for reconciliation and understanding among Ukrainian regions, and a presentation of the classic icon in an unusual format. Here, the emphasis is made on the artistic rather than the devotional properties of the works.

Below are excerpts from some of the feedback on the PFVMH support events in Germany that was received by the organizers or posted online:

Oksana Makohon, Leipzig: “The amount collected for the mobile hospital needs in our city is €1,500. I bow low toward all the donators! With your concern you have saved more than one life! During the charity party we also continued collecting money for an ambulance, which we could transfer, e.g., to the mobile hospital. As of today, we have collected as much as €4,377!” (A post in Oksana’s Facebook; dated Apr. 27, 2015.)

Valentyn Moroz, Munich: “My heart was heavy from the statistics cited during the presentation, from realizing one more time that again volunteers — by heavy work, by cents — raise funds for what the state should have been doing. However, another thought prevailed: is it possible to win a victory over the people that by efforts of several dozens of volunteers successfully does the job that only the state can do in other countries?” (A post in Valentyn’s Facebook; dated Apr. 29, 2015.)

Iryna Markevych, Hanover: “You cannot even imagine how much grateful the audience were after yesterday’s party. I still receive phone calls and emails… You touched the hearts of the German part of the audience as well.” (From email dated May 2, 2015. Iryna’s another feedback on the exhibition in Hanover can be found in her Facebook — a post dated Apr. 30, 2015.)