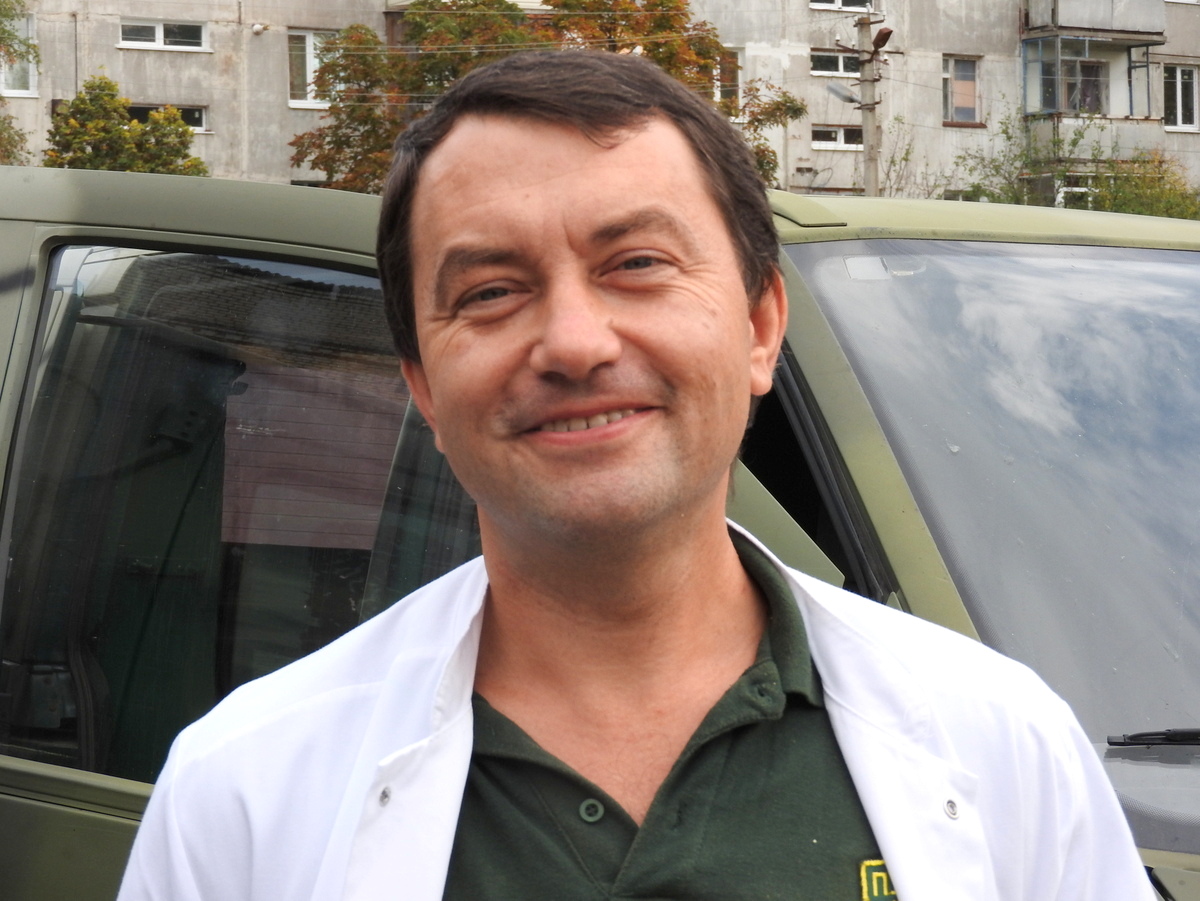 Viktor Belilovets, anesthesiologist and resuscitation specialist of the Pirogov First Volunteer Mobile Hospital (PFVMH), celebrated his 42nd birthday in Stanytsya Luhanska on Oct. 9 – the day on which troops withdrawal from this town had been scheduled under the Minsk Arrangements. As usual on Sundays, there was not much to do, mainly routine GP’s workload; and thank God, no wounded – like there had been none since Oct. 1, the beginning of the PFVMH’s first mission in “Stanychka.” The Russian terrorists also behaved, more or less. “A couple of times they ‘let off,’ but comparing to other days there was no ‘salute’ at all,” Viktor says jokingly. “But in general they fire every night, starting about 11 p.m.”

Viktor Belilovets has been with the volunteer hospital since its very first mission in late 2014. This one is his sixth personal mission (the PFVMH’s 19th). An anesthesiologist at the Urology Institute of the National Academy of Medical Sciences of Ukraine, holder of the Participant in Combat Operations status, and holder of the medals “For Saved Life” and “For Assistance to the Armed Forces of Ukraine,” why would he continue going to Ukraine’s East? “A feeling of duty and epinephrine,” Viktor Answers. “Those who have already been here long to come back again. It’s more interesting here; it’s not the “mire” as in Kyiv. People here treat each other somehow differently – doctors among themselves, with patients and the wounded.”

According to Viktor’s observations, the attitude of locals in the East toward non-local doctors, both military and civil, has improved significantly since 2014. “During the first missions they saw us as enemies, but came to us for treatment – everybody wants to live!” he says. Obviously, the two-year activities of the PFVMH in Eastern Ukraine have contributed to the fact that residents of Stanytsya Luhanska protest against the withdrawal of Ukrainian troops.

“It’s very good that the withdrawal has not happened, otherwise we would have left,” Viktor Belilovets commented. “Because Russian troops would have come here (and it’s just regular Russian troops stand on the other side, according to intelligence), and for them we are ‘junta’s punishers’, and the names of most of our medics are posted on separatist sites as ‘killers and punishers.'”

The withdrawal of Ukrainian troops, and so doctors of the volunteer hospital, would have jeopardized not only the lives of Ukrainian patriots in Stanytsya Luhanska but also the health care system in its district: according to application of the District Territorial Medical Association to the PFVMH, the system there is staffed at less than a half – 48 %.

Today, nine doctors and paramedics of the PFVMH work at the Stanytsya Luhanska Central District Hospital and one of the district’s village paramedic stations. Over the mission’s first week alone, they provided care to 300 patients and carries out about 350 manipulations. The youngest patient was three months old, and the oldest, 93 years.