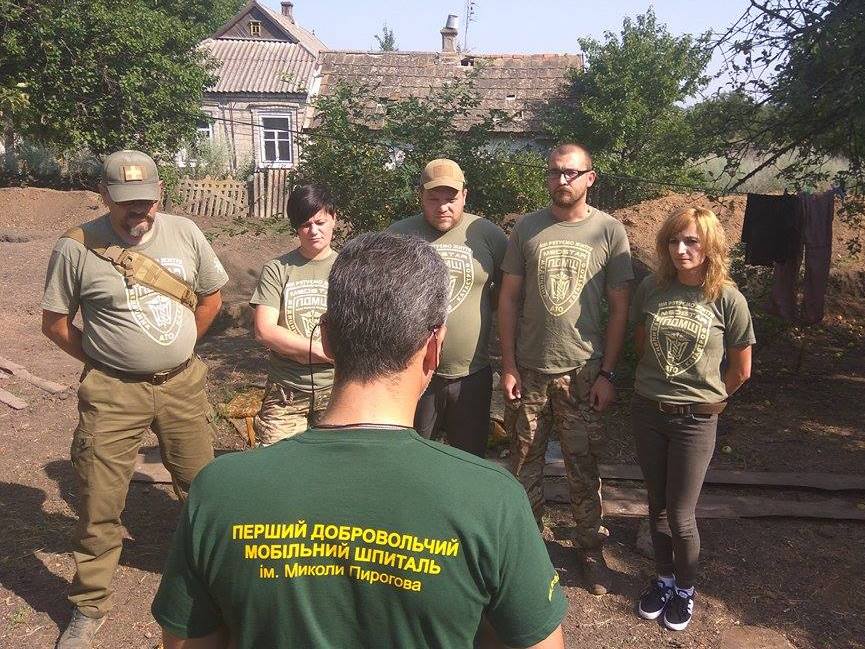 Today, four medics of the Pirogov First Volunteer Mobile Hospital of the group decorated by the Defense Minister were handed their awards at the “front line of defense of Ukrainian independence,” as they put it themselves. PFVMH Vice President in charge of liaison with the Armed Forces of Ukraine and law enforcement agencies Oleksandr Hahayev and anesthesiologist Maryna Bilinska were awarded a Badge of Honor, and paramedic Oleksandr Bokhonok and anesthetist Vyacheslav Leontyev received a medal “For Assistance to the Armed Forces of Ukraine.”

PFVMH President Gennadiy Druzenko handed the awards in the temporary location site at the front of one of military units, where the volunteer medics reinforce its medical service.

In early July, Defense Minister GA Stepan Poltorak signed Order #453, decorating 31 PFVMH participants “for their significant personal contribution to the provision of specialized medical aid to servicemen of the Armed Forces of Ukraine” participating in the Anti-Terrorist Operation.” The order also mentions the “exemplary performance of their duties” by the volunteer medics and the “high professionalism” they showed.

This conferment was initiated by MP Yuriy Bublik, who sent a corresponding inquiry to the Defense Minister, according to the lawmaker’s blog.