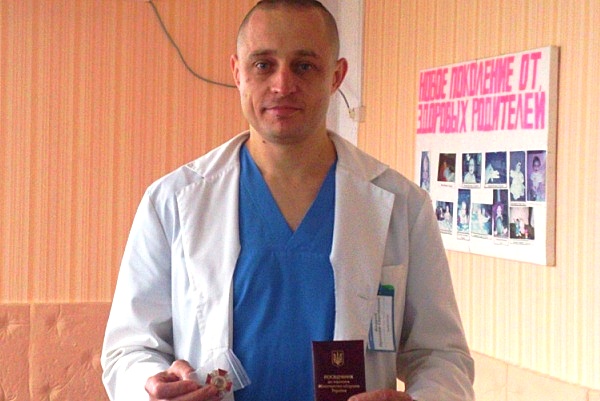 During a meeting at Donetsk Oblast’s Kramatorsk City Hospital #1 on Monday, surgeon Yaroslav Boyarko was handed a Badge of Honor from the Defense Ministry of Ukraine, Vostochny Proekt reported.

Yaroslav Boyarko is the last of the Pirogov First Volunteer Mobile Hospital’s medics, awarded by Defense Minister Order #453, who has received his award. The order, signed on July 4, 2017, awarded 31 pirogovites for their significant personal contribution to the provision of specialized medical aid to servicemen of the Armed Forces of Ukraine participating in the Anti-Terrorist Operation, as well as for the exemplary performance by the volunteer medics of their duties and the high professionalism they showed.

In 2015 and 2016, Yaroslav participated in four missions of the PFVMH in Eastern Ukraine.

(Photo from the Vostochny Proekt site)