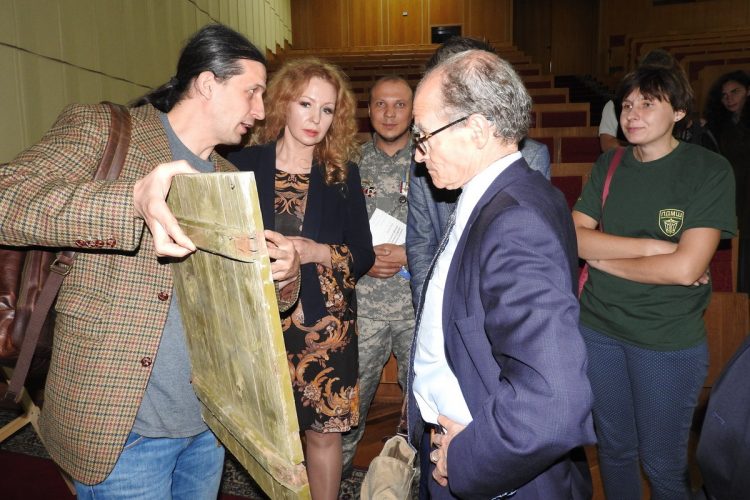 Daniel Fried retired in 2017 after a 40-year service at the U.S. Department of State. He was a U.S. Ambassador to Poland and Assistant Secretary of State for European and Eurasian Affairs. When Russia invaded Ukraine, Mr. Fried held the office of Coordinator for Sanctions Policy. In the IIR, the American diplomat read a lecture on “Ukraine’s Opportunities and America’s Tasks” to over 300 students. Set up in the institute’s assembly hall also was a blitz exhibition of icons that Daniel Fried viewed after the lecture. Oleksandr Klymenko briefed the esteemed guest on the art project, of which receipts go to support activities of the PFVMH. According to the artist, the main artistic idea behind the project is to combine what seems to be incompatible: an icon and a weaponry box, the thousand-year language of art and the contemporary language of warfare. “This combination of war and peace reminds me the American seal, which has the eagle holding an olive branch in one talon and arrows in the other one,” Daniel Fried shared his impression. He said that he had not known about this project and was glad to learn about it now: “This is wonderful stuff, it’s culture and patriotism at the same time.” In this connection, he recalled what Zbigniew Brzezinski, whose family comes from Lviv, told him after the Orange Revolution: “We are witnessing the development of Ukrainian nation in the democratic form and the democratic spirit true to its culture and democratic traditions.”

The lecture in the institute was organized under the auspices of the National Forum of the Transformation of Ukraine and the U.S. Embassy in Ukraine. The PFVMH is thankful to National Forum coordinator Mykhaylo Khariy for his initiative to hold the blitz exhibition of icons during the lecture.