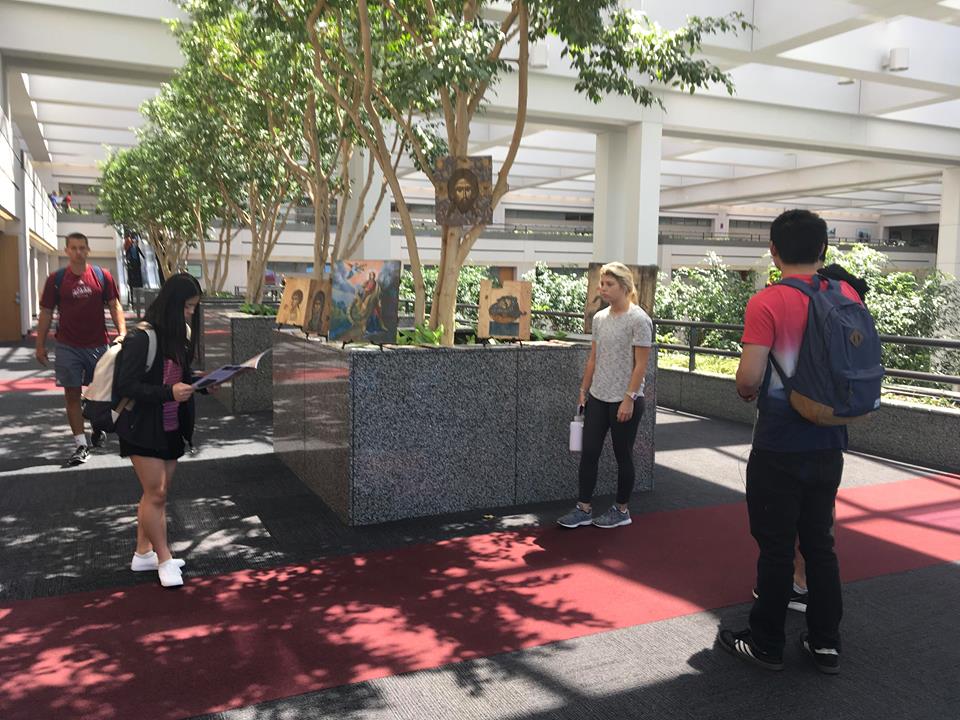 Icons exhibition in support of PFVMH opens in LA

An exhibition of “The Icons on Ammo Boxes” showcasing works by Kyivan artists Oleksandr Klymenko and Sofia Atlantova was opened on Wednesday at the Loyola Marymount University in Los Angeles, CA. Two icons were sold on the first day, the receipts going to support activities of the Pirogov First Volunteer Mobile Hospital.

The exhibition was organized by the Huffington Ecumenical Institute on the initiative of Archimandrite Cyril Hovorun, Prof. at LMU and acting HEI Director, in cooperation with the Marymount Institute and the Bellarmine College of Liberal Arts. As Archimandrite Cyril pointed out at the opening ceremony, the organizers wanted to demonstrate that art, including religious art, does not exists for itself but can serve people’s needs and enhance social justice.

“We wanted also to raise awareness of what is going on in Ukraine. Ukraine was on the front pages of world media in the beginning of 2014, during the Revolution of Dignity. Then, the annexation of Crimea by Russia happened, and the war in the eastern part of the country began. Nowadays, you don’t hear much about the war in Ukraine, do you? And yet it continues,” the Archimandrite said. Participants in the ceremony included students of those institutions and their parents, faculty members, as well as representatives of local and religious communities. PFVMH President Gennadiy Druzenko told them about work and achievements of the volunteer hospital, and artist Oleksandr Klymenko familiarized them with the icons. Two artworks were sold on the exhibition’s first day: icons “Our Lady of Vyshhorod (Volodymyr)” and “Saint George and the Dragon.” The authors donate receipts from the sail to support PFVMH activities.

More about the “Buy an Icon – Save a Life” art project can be found here.