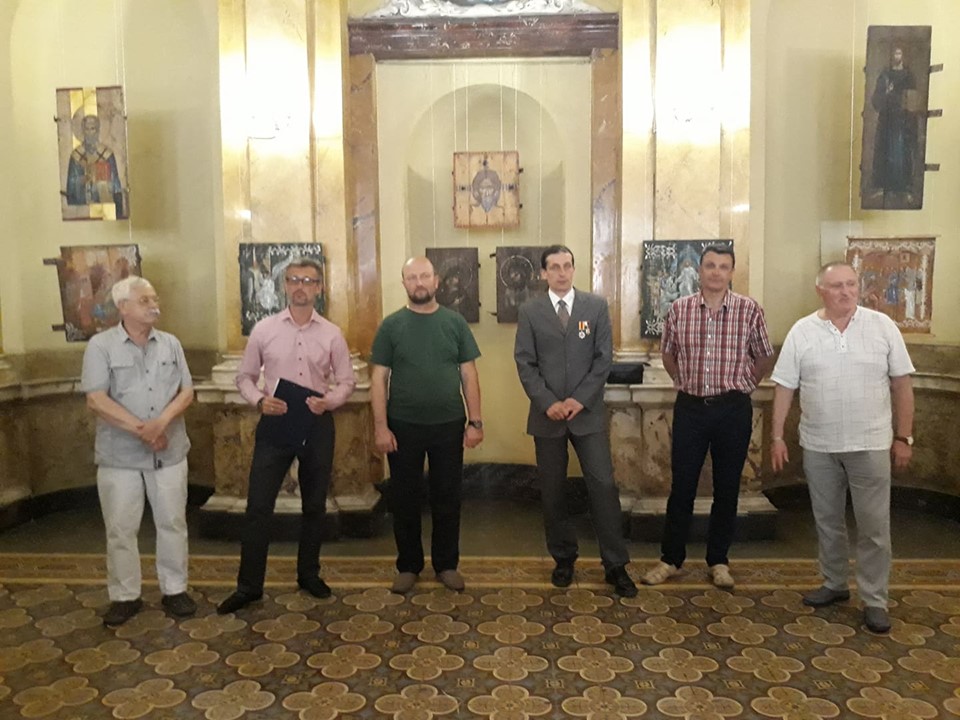 An exhibition of unique icons, “Passiones/Passion”, by Kyivan artists Sofia Atlantova and Oleksandr Klymenko opened today in Lviv in the Ethnography, Arts and Crafts Museum. The artists painted the icons on ammo boxes, brought from combat areas in Eastern Ukraine, as part of the “Buy and Icon – Save a Life” project. The “Passiones/Passion” series is dedicated to the fifth anniversary of the beginning of the Russian-Ukrainian war in Donbas.

The “Buy an Icon – Save a Life” art initiative aims at supporting activities of the Pirogov First Volunteer Mobile Hospital, an NGO that engages civilian medics to provide medical assistance to civilians and servicemen in the Joint Forces Operation zone in Eastern Ukraine. PFVMH President Oleh Shyba, speaking at the exhibition opening ceremony, outlined the establishment and operation history of the volunteer hospital. “We’ve been working in [Ukraine’s] east for five years based on rotation [of medics] because our doctors have their jobs in Lviv or Kyiv, Kharkiv, Odesa. In this way, our hospital has united the west and the east,” the PFVMH leader said.

He also sincerely thanked Sofia Atlantova and Oleksandr Klymenko, the artistic endeavors of whom brought to the PFVMH 97 percent of its funds.

The main idea of the “Buy an Icon – Save a Life” project is the transformation of death (symbolized by ammo boxes) into life (traditionally symbolized by icons in Ukrainian culture). Thanks to the cooperation of the artists and the volunteer medics, this victory of life over death happens not only on the figurative and symbolic level but also in reality. Before Lviv, the “Passiones/Passion” series of works was exhibited in Kyiv’s St. Sophia Cathedral and the Exaltation of the Holy Cross church of the Roman Catholic parish in Fastiv, Kyiv Oblast.

Exhibitions of the icons on ammo boxes by Sofia Atlantova and Oleksandr Klymenko have already been held at the European Parliament, Parliaments of Ukraine and Lithuania, St. Sophia Cathedral in Kyiv, Kyiv Pechersk Lavra, and the Lithuanian Embassy in Ukraine. The icons have been displayed in Antwerp, Berlin, Bloomington, Bonn, Catania, Cologne, Edmonton, Frankfurt am Main, the Hague, Munich, Hanover, Leipzig, Lublin, Los Angeles, Milan, Montreal, Ottawa, Philadelphia, Prague, Przemyśl, Rome, Toronto, Vienna, Warsaw, and Winnipeg, as well as the Ukrainian cities of Dnipro, Fastiv, Lutsk, Lviv, Mariupol, Kamyanske, and Pokrovsk. Exhibitions of the icons on ammo boxes were also part of the 25th Economic Forum in Krynica, Poland, and the 8th Kyiv Security Forum, and were held in the University of Alberta in Canada, the Ukrainian Catholic University in Lviv, and the Superior Institute of Religious Sciences of St. Thomas Aquinas in Kyiv.