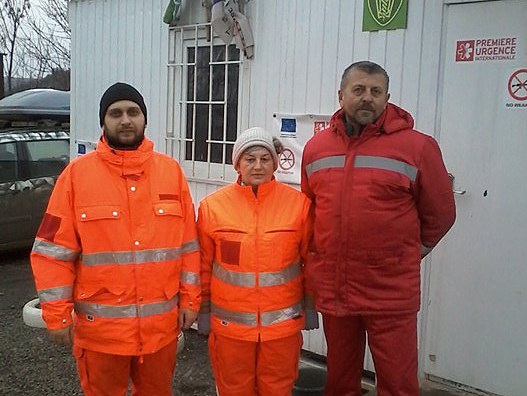 In Novotroitske, PFVMH medics attend wounded old man who was “born with an armor vest” and likes telling jokes

Today in Donetsk Oblast’s Novotroitske, medics of the Pirogov First Volunteer Mobile Hospital provided urgent assistance to a man who had tripped a mine near the Ukrainian checkpoint, the driver of the PFVMH team serving the first aid station nearby reported.

According to Vasyl Oleksyuk, a 70-year-old resident of Makiyivka, which is on the occupied territory, was traveling to Zaporizhya. While still in the grey zone before the Ukrainian zero point, and ignoring the mine warning signs, he went to bushes to pee, like he said he had done many times before. This time, however, he was unlucky: tripped the mine. The first aid to the wounded was provided by Ukrainian border guards, who applied a tourniquet and called PFVMH medics. Surgeon Dmytro Pozharsky and nurse Nina Shaposhnyk came to the “zero” along with Vasyl. The medics found numerous injuries of the left leg from the hip to the ankle. The chest’s left side was also touched but the lung was intact. The medics replaced the tourniquet for a pressure bandage and brought the man to the first aid station, where he was stabilized, and then handed him over to an ambulance, which took him to a hospital.

“You may say that he was born in an armor vest rather than in a shirt, because splinters passed just within a few centimeters from main arteries,” Dmytro Pozharsky.

The old man turned out quite brave (was not scared of being in the hands of “junta doctors”) and also with strong nerves. “When we arrived, he was conscious, and after we had everything packed and bandaged and put him into our minibus, he said, ‘Mind if I tell you a joke?’ So we are carrying him and he tells us jokes,” Dmytro said, laughing.

The first-aid station for citizens crossing the delimitation line through the Novotroitske Checkpoint was opened on Dec. 27, 2016. The facility was set up under a project funded by the European Commission’s Directorate-General for European Civil Protection and Humanitarian Aid Operations (ECHO) and implemented by Première Urgence Internationale, a non-profit, non-political and non-religious international NGO, in collaboration with the PFVMH.