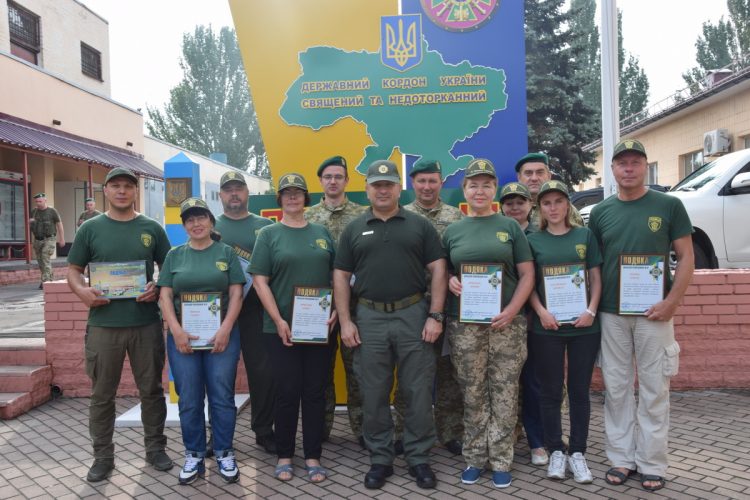 Judging by feedback, the pilot project may be considered an undeniable success. “Valentyn Volokha, SBGSU Administration Health Department Chief, has personally phoned me, thanked for good work, and spoke about further cooperation,” says Tamila Danilevska, PFVMH Executive Director. “We have agreed to discuss our next steps specifically when I’m back in Kyiv. I’ve also had talks with the chief of the SBGSU Donetsk-Luhansk Regional Directorate, Maj. Gen. Oleksandr Lebid, and the heads of all units where our doctors worked. All of them thanked us.” The check-ups began on Aug. 12. As the manual requires, undergoing annual preventive check-ups is mandatory for every serviceman. According to the Health Service head of the SBGSU Donetsk-Luhansk Regional Directorate, Lt. Col. Oleh Havrashenko, this survey’s findings show that the border guards’ health is at an appropriate level that allows them to fulfill their tasks. “However, the medical survey has discovered cases that neither we nor the servicemen themselves were aware of, which require further examination and elaboration. These cases are not critical,” Havrashenko said.

He also said he is satisfied with the pilot project and considers it successful. “We were reinforced by means like ultrasound scanner, [the doctors] did diagnoses and tests. Our and civilian medics communicated and shared their experience, what was for their benefit. We reported to the leadership on results of our work almost daily and there’s never been any criticism on their part.” SBGSU Donetsk Border Guard Detachment Health Section Head Maj. Andriy Rodin, too, says that the conduct of annual preventive check-ups by joint efforts of volunteer and military medics was both successful and useful: “They have worked very efficiently and rendered us great assistance. They did ultrasound scanning, ECG, analyses. Everybody liked it very much, everybody praised, especially frontier veterans who snatched this examination opportunity and were just delighted.” On the day before the last day of work of this team, in front of the troops’ formation, SBGSU Donetsk Border Guard Detachment Chief Col. Anatoliy Kotsyurba handed a certificate of acknowledgment to each member of the team and a separate one thanking PFVMH personnel.

The photos are courtesy of the SBGSU.