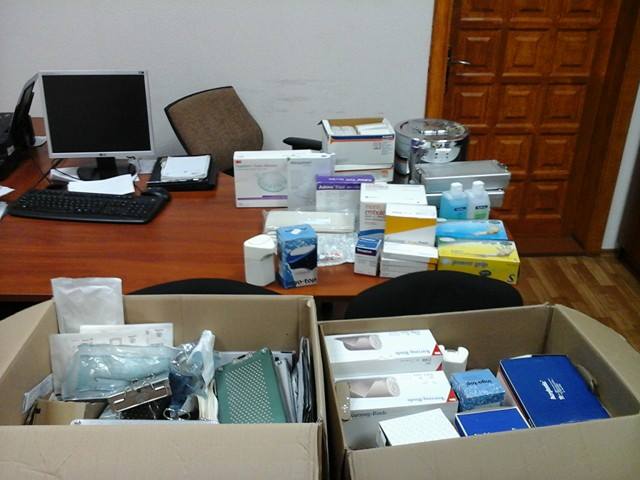 The Pirogov First Volunteer Mobile Hospital (PFVMH) has received a parcel containing various surgical instruments and materials from the Ukrainian Greek Catholic parish community of the Holy Great Martyr George the Victory-Bearer Church in Leipzig, Germany. These items will soon be sent to Eastern Ukraine for volunteer doctors to use them for saving lives and health of Ukrainian servicemen and local civilians, according to PFVMH President Gennadiy Druzenko.

Leipzig’s Ukrainian community activist Oksana Makohon told the PFVMH that the instruments and materials were an endowment of ethnical Germans – a married couple of doctors from Baden-Württemberg.

The Ukrainians of Leipzig have been helping the volunteer hospital since April 2015, when, at invitation of the community, Gennadiy Druzenko together with renowned Ukrainian kobzar Taras Kompanichenko brought an exhibition of icons to this German city as part of a tour in support of the PFVMH. The event raised €1,500 for the hospital and launched a fund-raising campaign for an ambulance. A Mercedes ambulance was transferred to the PFVMH as soon as that year’s summer.

More on charitable activities of the Ukrainian parish community in Leipzig (in Ukrainian).