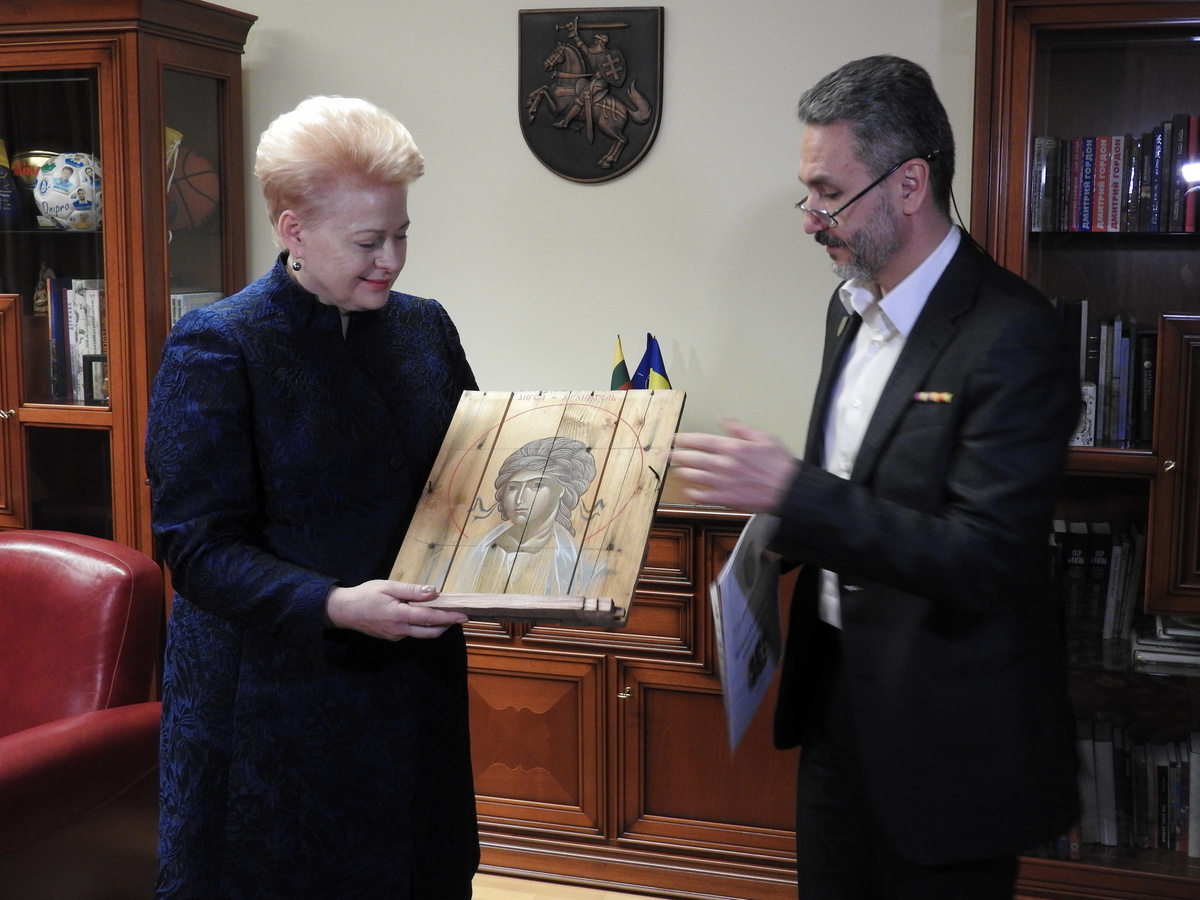 This morning in the Lithuanian Embassy in Kyiv, President of Lithuania Dalia Grybauskaitė, who is in Ukraine on an official visit, met with representatives of Ukrainian volunteer organizations, specifically “The Wings of Victory, a charitable foundation, and the Pirogov First Volunteer Mobile Hospital.

The Lithuanian leader reportedly initiated the meeting. According to the head of TWoV and a PFVMH veteran, Viktoria Kramarenko, Ambassador of Lithuania to Ukraine Marius Janukonis called her before the President’s visit. “He said that Dalia Grybauskaitė would like to see people engaging in volunteering, where activities of their organizations are broad, reaching out to not only the front,” Viktoria said. She also presumed that her charitable foundation was probably selected for this meeting also because of its connections with the Baltic countries: TWoV operated with support of the Estonian government and renowned public figures in this country, including the head of the Ukrainian Culture Center in Tallinn, Anatoli Ljutjuk, and the chairwoman of the Estonian Congress of Ukrainians, Vira Konõk.

Based on Viktoria Kramarenko’s proposal, the meeting was also attended by PFVMH Supervisory Board Chairman Gennadiy Druzenko, volunteer Natalia Prylutska, who has been assisting Ukrainian warriors since the Maidan revolution and who closely collaborates with Lithuania, and one more representative of TWoV, civil society activist and Oksamyt magazine Editor in Chief Tamara Markelova. On behalf of the PFVMH, Gennadiy Druzenko presented Dalia Grybauskaitė with a Guardian Angel icon, painted by artist and main sponsor of the PFVMH Oleksandr Klymenko on the lid of an AKM ammo box brought from a battlefield near Mariupol. “It is symbolic that charitable exhibitions of icons on ammo boxes were held in both the Lithuanian Embassy in Ukraine and the Seimas of the Republic of Lithuania. We sincerely hope that the Residence of Lithuanian President will be the next exhibition venue, and with your assistance, we will be able to raise funds for the so much needed project “Mobile Clinic for the Grey Zone,” which will allow us to examine and provide medical care to dozens of thousands of residents of Ukrainian Donbas, who live in the vicinity of the front line,” Druzenko said, handing the icon.

A helmet, brought from the front and painted by Ukrainian artist Maryana Dorichenko, was a present from TWoV and Natalia Prylutska. They also gave the Lithuanian President a “Keeper of Ukraine” badge.

Ukrainians’ attitude towards Lithuania is very warm not only because the two are tied by their many-century common history, which is much longer than their history of staying together under the yoke of Moscow. “Since the beginning of the Revolution of Dignity and then for the all five years of the war with Russia, Lithuania remains one of Ukraine’s best friends, if not the very best. And as for its President personally, Dalia Grybauskaitė, Ukrainians just admire her. It won’t be a mistake to say that a majority of them would like to see a president exactly like her as the head of their state,” Gennadiy Druzenko shared his impression after the meeting.