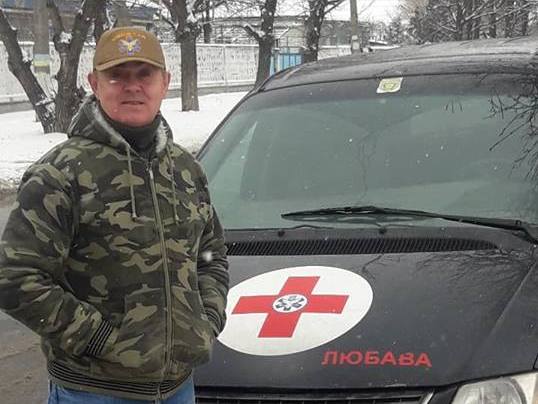 This morning in Maryinka, Donetsk Oblast, three defenders of Ukraine were wounded by an anti-tank guided missile that hit a Ukrainian army vehicle. Sadly, the injury of one of the warriors turned out lethal. The two others were brought to a hospital by a medic of the Pirogov First Volunteer Mobile Hospital.

Ihor Pysarchuk, a PFVMH Medevac doctor, reported that the Russian ATGM hit the Ukrainian GAZ-66 truck when the latter was pulling into the position. There were three servicemen in the vehicle. “The missile hit right the cab, its splinters injuring the boys,” Ihor said. “The vehicle caught fire. The boys were pulled out from the vehicle. Cartridge began exploding because of the fire.”

The volunteer medic received the call at 10:46 a.m. “I arrived at the position the first, the military medics following. This position is an open space. The vehicle is ablaze, the cartridges are exploding. The boys lie five meters from the vehicle. We quickly loaded the heavily wounded one into the military ambulance Saxon and they whirled off in order not to be seen to avoid a second missile. Yet our Chrysler of the PFVMH is a civilian vehicle and we hoped that they wouldn’t touch the civilian one. Nevertheless, we also quickly loaded the other two and I rushed with them toward Kurakhove,” Ihor said.

“I didn’t have much time to provide aid – there is no place for the vehicle to park, no place to hide. And I was alone, accompanied by neither a driver nor a paramedic. And we wrap up literally within a couple of minutes: The Saxon went first because the vehicle was military and large. And I followed the Saxon, too.”

As soon as 11:20 a.m., that is, half an hour after the initial call, Ihor delivered the wounded to the hospital in Kurakhove, 22 kilometers from the position. He indignantly says that, on their way to the hospital, not a single driver yielded the right of way to them, despite the PFVMH logo on the vehicle as well as red crosses on its mirrors and sides; he also worked the siren and lights but to no avail.

Ihor Pysarchuk is from Skadovsk in Kherson Oblast. This mission with the PFVMH is his eleventh. “I always go to the foremost positions to take the wounded. Now I’ve had some 25 men if not 30. Five of them I was not able to save.”