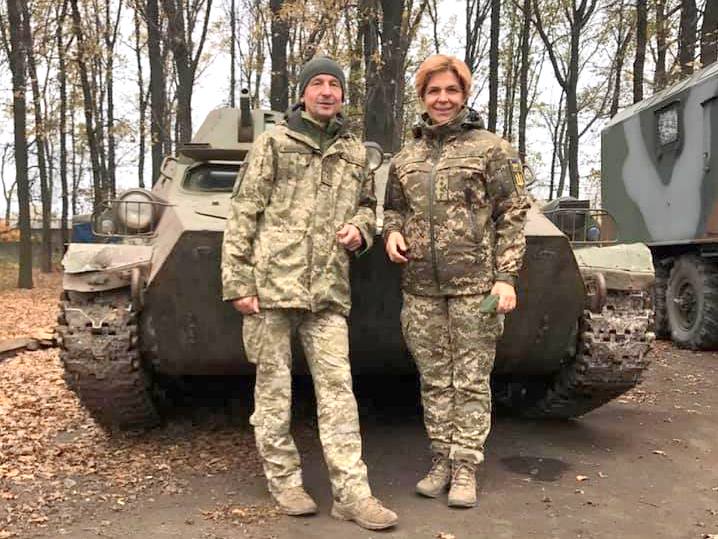 Medical Service Capt. Olha Bohomolets: “I am now where I feel most efficient and happy”

On the last day of October, the following post appeared on Olha Bohomolets’s Facebook: “My new life – orderly – begins with exercises and morning forming-up. And my new position is called deputy chief of the mobile hospital in the city of Mariupol. Medical Service Captain.” The FB post comes with several photos, on which, despite the camouflage uniform, the renowned former MP and chairwoman of the last convocation’s Parliamentary Health Committee is perfectly recognizable.

No need to read the comments under the post to get it that the news amazed many, to say the least, and did it favorably. For example, Gennadiy Druzenko, Supervisory Board Chairman of the Pirogov First Volunteer Mobile Hospital, wrote: “Wow! Taking off my hat!” In a private chat with the author of these lines, he also said that this deed of hers has confirmed that she is a real representative of the Ukrainian aristocracy.

For the PFVMH, Olha Bohomolets is by no means an outsider since she is a member of its Board of Trustees, and the volunteer hospital more than once received her ponderable parliamentarian’s support. And we are sincerely grateful that Olha found time for the interview.

Have you signed a contract with the Armed Forces of Ukraine? No, I am on a mission from the Ukrainian Military Medical Academy, where I’m a professor at the Military Therapy Department.

But it was your initiative, wasn’t it? Or they just sent you on the mission?

It was certainly my initiative. I had a desire to go to the front immediately after Maidan. In 2014, I brought my military ID to the recruiting office but they just didn’t know what to do with reservists. Then I went to Parliament. When I already became an MP, I wrote several applications to the Defense Minister, asking to mobilize me, but received refusals. Finally, when I retired as an MP, there was the green light but still, I waited a few months, going through authorities and obtaining permits.

Would it be correct to say that now you serve in the army? Yes: daily forming-ups and lunch on schedule [laughing]. It’s not for the first time for me. I was a Medical Service Lieutenant on the Register on the Interior Ministry of Ukraine (this unit does not exist anymore; it was formed specially for the provision of medical care in the Chornobyl Nuclear Plant zone). In 1992 and 1993, I worked as a volunteer in the Chornobyl zone: treated and advised Interior Ministry personnel, firefighters, and those working in Prypyat itself at the reactor. I wore a uniform with shoulder marks then as well.

That is, this situation isn’t unusual for me. I love military medicine and I think that I’m most useful and needed just here and now.

And was it also your initiative not just to go to serve in the army but right in the Joint Forces Operation area?

Yes, of course, it was. I’ve always asked to send me to the front.

When was your first day of service?

In late October. I’ve been here for two weeks now. Before that, there had been a week of training in the organization of military hospital operation and tactical medicine.

What are your first impressions? Is it difficult to endure all the “hardships and privations of military service”? In other words, do you often recall the In The Army Now song by Status Quo?

I have an absolutely different attitude toward this. First, every person defines a certain life path for himself or herself. After the absolute toxic term in Parliament, the toxic being in the power, I need self-purification. Being in power is toxic in any case and has an impact on your personality. For me, the current service is obedience, when you were somewhere at the top and then leave all that and form up, tidy up, wash. That is, you come back to the ground to a normal life. It is in addition to that I think that today right here, in the vicinity of the front, I can do most for people – and not only for military medicine.

As a matter of fact, I’m about to leave for Volnovakha, where I’ll provide consultations to civilians at the Central District Hospital and then will read a lecture for all of the district’s family doctors on early detection of oncologic diseases. So I try to fully apply all my knowledge, all my background, all I can do best. My hospital management supports me and tries to make the maximum use of my potential, among other things, to establish good relationships with both the population and the authorities and realize in the best possible way everything I’m able to do, everything I learned before. That is, besides the merely military aspect of work as the hospital’s deputy chief, I also continue working on assistance to the civilian population, what is very important in my view. How did your colleagues at the hospital receive you? Because Olha Bohomolets is the name.

I went in front of the formation at the morning forming-up. Saluted the commander. The commander introduced me and asked the personnel to take me into their team. Our commander is cool, a fighter.

Well, you might feel some special treatment, either especially favorable of vice versa. People are surprised. They look at me and cannot understand, what do I do here? [Laughing.] I see that in their eyes. I live just in the hospital, in a cubicle. We hold meetings in this cubicle. Now, besides our work, we also make arrangements for celebrating an anniversary of the hospital. We try to attract as much humanitarian aid as possible to make the lives of our patients and personnel easier. I use all my previous experience in order to maximally help the hospital.

You are a member of the PFVMH Board of Trustees. You helped us when you were an MP and chaired the Parliamentary Health Committee. Are you going to help us further on, if not ex officio then at least by virtue of your authority?

Of course, I will help! By the way, I’ve met PFVMH workers closer to the frontline recently. We will certainly help all we can.

This month, we’re also planning joint training and coordination exercises on first-level evacuation with one of combat units. I engage in coordination of these issues either.

As a person who more than once sang with you the anthem of Ukraine on Maidan, I cannot help asking if you still have a desire and a possibility to sing at your new place of service. I mean not singing for yourself but for other people, because you do it professionally.

Nobody knows about it here.

Well, they don’t know that I sing professionally. And I don’t advertise. I think it’s early to surprise my colleagues again [laughing].

If seriously, I have a lot of work now. There are not only somatic patients but also the wounded. We also have to think and plan the preparations for the anniversary since supporting the morale of the personnel is no less important than medical supplies for the hospital. Well, and how to do so that patients will feel cozy on the New Year’s Eve and Christmas. If we don’t think of it now, it might be late afterward. Money for that purpose is not allocated, so we need to look for options and opportunities. And so I do, and therefore, I’m in not in a mood for singing.

Actually, I feel huge internal satisfaction: you do what is needed and right where it is needed. I’m now in a place where I feel being maximally efficient and maximally happy. And maximally realized too.