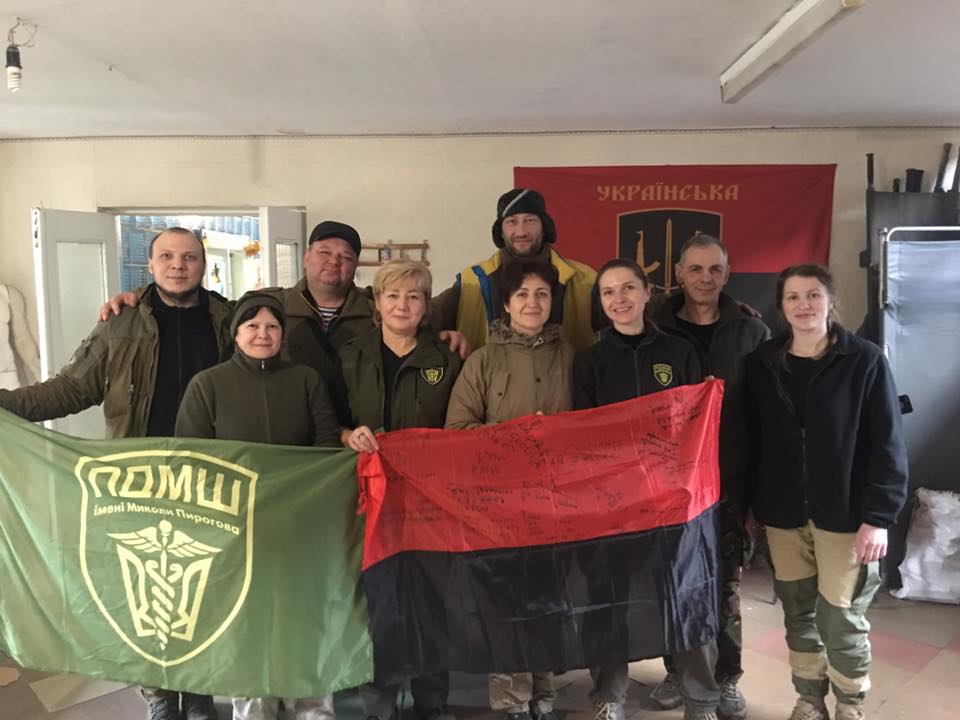 “Negotiations with the enemy are out of the question at all!” – PFVMH medics preventively examined Ukrainian warriors A group of Pirogov First Volunteer Mobile Hospital medics spent the end of February and the first days of March at the front, where they examined warriors of several units of the Armed Forces of Ukraine and the Ukrainian Volunteer Army – a total of about 500 examinations within six days. The preventive survey comprised a general medical examination and history-taking, including blood pressure, heart rate, saturation, wounds, complaints, etc. The medics also did ECG, adjusted dosages of hypertensive and cardiac glycosides, and carried out rapid tests for blood sugar, HIV/AIDS and hepatitis as well as Rhesus factor and blood group, if required. Manual therapy and massage were also done on those who needed these. Like one year ago, the “medical landing party” for preventive examination of servicemen has been initiated and organized by Viktoria Kramarenko, Kyiv City Clinical Hospital #2 deputy chief physician for the nursing staff and head of the Wings of Victory foundation. She was accompanied by cardiologist Iryna Kotsyubynska, nurse Svitlana Druzenko, and masseur Vykola Dorofeyev. The team also included PFVMH Vice President for Logistics Ihor Buyvol and Patriots of Ukraine foundation Chairman Serhiy Kyselyov. “We managed to do during the week more than expected because we had thoroughly prepared and thought through our work,” Viktoria Kramarenko reported. “We brought along a lot of medicines and materials, such as drugs for urgent care, vitamins, cold and cough drugs, antibiotics, cardiac glycosides, antihypertensive drugs, painkillers, anti-inflammatory ointments, rapid tests, dressing materials, and burn kits. All these items have replenished the medical stock of units where we worked.” She also jokingly said that vitamins were used as a “bonus” for the warriors who came for the examination. The mission lasted from Feb. 24 to Mar. 2. The four days in February, the team worked at AFU units, and the first two spring days, they surveyed units of the UVA. “We have known many warriors since last year when we carried out a similar survey, and they have become like our kinfolk since,” says Viktoria. “Moreover, thanks to having the last year’s diagnoses, our work was much more effective.”

According to her, the health situation in the army over the year has neither worsened nor improved. There is no preventive examination system, not all servicemen undergo rapid testing when enrolling, and half-year control checkups are not done. “Many of those at the front line have higher sugar levels (6 to 7 units) suggesting a stress factor and higher blood pressure. Obviously, this is caused by night watch, poor sleep, and mental and physical stresses.” Still, the morale of the defenders of Ukraine, according to Viktoria Kramarenko’s observations, remains high and there is no desire to somehow come to terms with Putin and finish the war at any cost. “Negotiations with the enemy are out of the question at all!” she said. “We had many conversations with warriors. The guys happily told about their service and their families. We also spoke a lot of various topics from the peaceful life, such as utility tariffs, fuel process, foodstuffs, etc.”