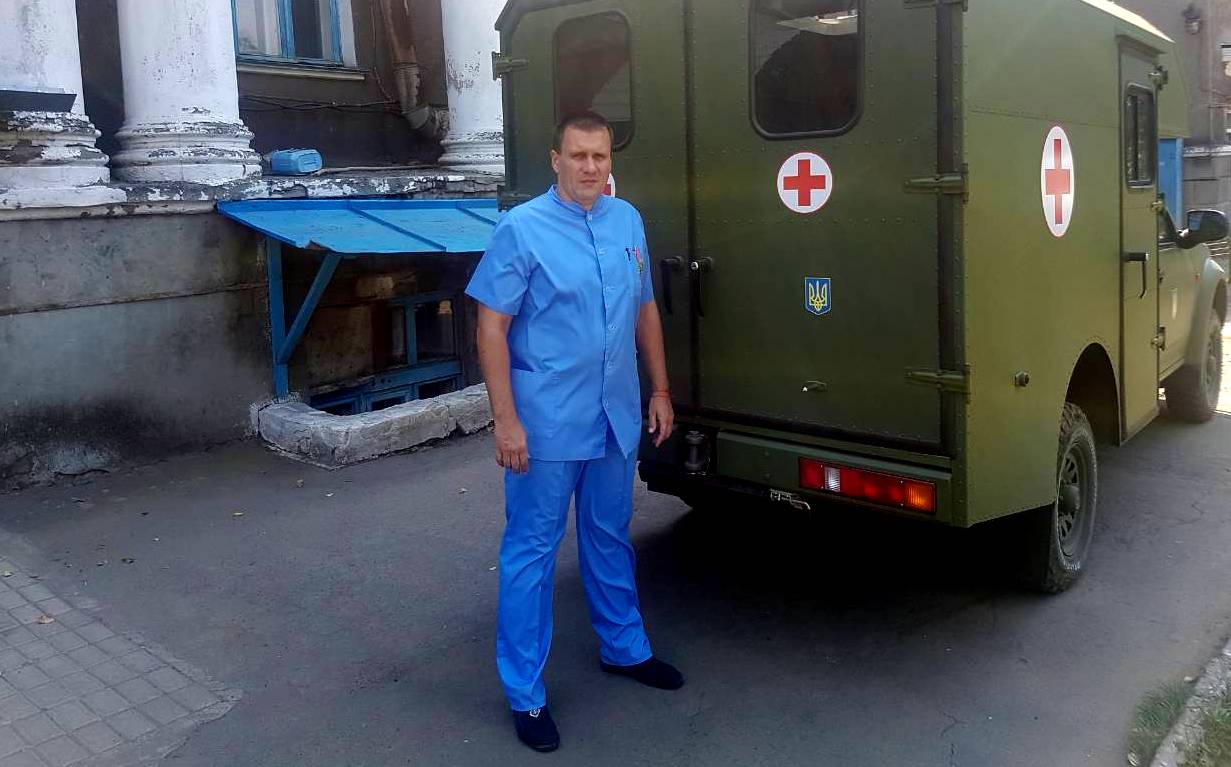 Oncogynecologist Andriy Rybin: “I think it’s a duty of every Ukrainian to show people who are here that Ukraine doesn’t give them up”

A few days ago, the president of the Pirogov First Volunteer Mobile Hospital, Gennadiy Druzenko, received a letter from the head of the Luhansk Oblast’s Popasna District State Administration, Serhiy Shakun. The district’s leader asks the PFVMH president to “express gratitude and encourage” one of the mobile hospital’s volunteer doctors – oncogynecologist Andriy Rybin, assistant professor at the Odesa National Medical University.

The letter reads that Andriy Rybin “has shown himself to be a real specialist, an attentive and skilled physician, a patriot of our State and a decent person.”

Since Aug. 1, Andriy has been working at the Popasna Central District Hospital within the framework of the PFVMH’s monthly mission. Other volunteer medics work with him there, too, and all they are skilled physicians. Why did the local administration single out just him? With this question I approached Olena Kostrova, acting head of the PDSA health department.

“I’m very grateful to the PFVMH and its every specialist personally for help,” Olena said. “As for this letter, I can only say that our Popasna leader Serhiy Shakun expressed the opinion of many patients who had received medical aid from Andriy Rybin. Nevertheless, every volunteer doctor deserves gratitude.” To clarify, I could not help questioning Andriy Rybin himself.

Why was the thank you letter sent regarding just you?

A.R.: It so happened that at the very beginning I treated people from the District State Administration, and operated on several of then straightway. So it’s their decision – fine with me. They’re even inviting me to the ceremony on Aug. 24 [Independence Day].

That means they have your skills proven from the own experience of their staff, haven’t they?

A.R.: Certainly (laughing)! But not only that. For example, a few kilometers from here is a village, Hirske. They have not had a gynecologist there since 2014. We have received more than a hundred people from that village alone in three weeks, and even operated some of them. So people are complimentary about the PFVMH.

It is your first mission with the PFVMH. Why did you decide to go?

A.R.: Yes, the first. Actually, I made my mind a year ago. Why? Probably, saw it as a sort of my duty. Frankly speaking, I though that we would be at the frontline, in medevac. But now I see that the frontline is here too. Here, our work is also needed very much, because we help not only civilians but also servicemen, night and day, when they bring the wounded and don’t have enough hands.

I think it’s a duty of every Ukrainian to show people who are here that Ukraine doesn’t give them up, that we will help them because we are one people, one nation.

Judging by how you said that, you are not sorry for going…

A.R.: Not that I’m not sorry, that is, I wouldn’t be sorry anyhow. But I see that this work is needed, badly needed. The main thing is that people who live here understand and value it. This is the most important thing. You can say they come round the clock. Some come in the evening, after work. May I come at seven, eight? You are welcome, no problem. They see that they are treated well and are grateful.

Have you encountered any difficulties? Maybe work overload?

A.R.: Too much work is not a difficulty. A difficulty is when you have no work. We have a lot of work in the operating room, day and night – it keeps you in quite a good rhythm. And concurrently I manage to proofread may already written doctoral theses, which I will defend at the National Cancer Institute.

I’d also like to say that the equipment of the hospital with instruments, supply of medicines and certain things that Ukraine puts into these territories are such that in Odesa you will have to look for a hospital equipped like that. That is, a lot is done for people here, what remains is to attract specialists. And just the PFVMH much helps with their attraction.