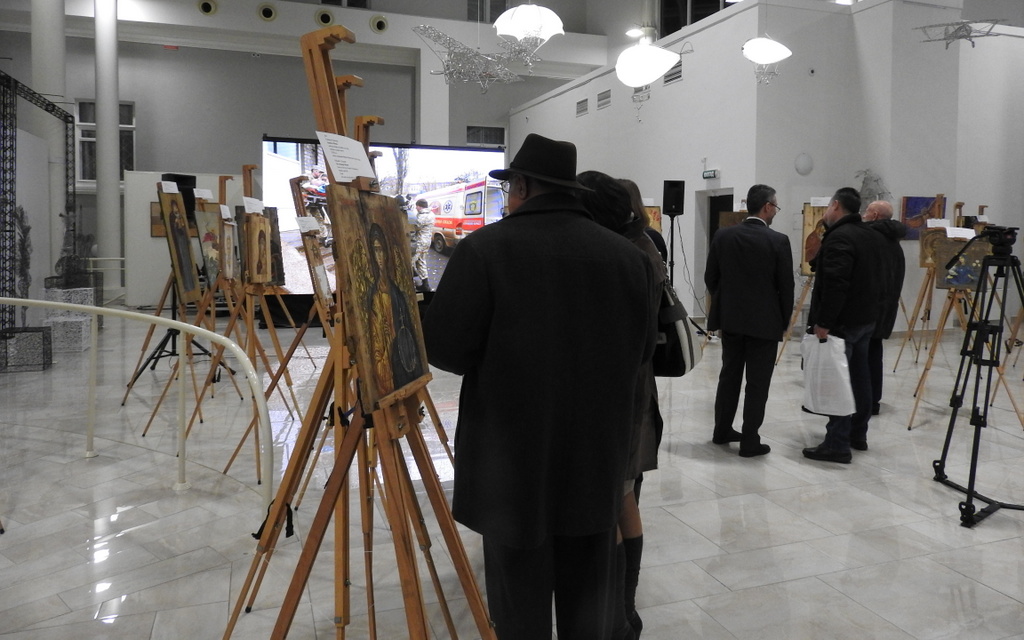 Partnership for the Sake of Life: Ukrainian Agribusiness Leaders Have Once Again Supported Good Cause of PFVMH

The charity event “Two Years Together: 20 Rotations, 220 Volunteer Medics and 10,000 Patients in the ATO Zone,” held in the National Museum of Taras Shevchenko in Kyiv on Nov. 25, 2016, was dedicated to the second anniversary of partnership between the Pirogov First Volunteer Mobile Hospital (PFVMH) and Andriy Hordiychuk, founder of the Agrarian Superstate Foundation and Chairman of the Board of the Svarog West Group. The organizers estimate that the event has resulted in a quarter million hryvnyas raised for PFVMH to provide skilled medical care to our defenders and civilians in Eastern Ukraine.

Diplomats, representatives of international organizations in Ukraine, MPs, government officials, politicians, public figures and media people participated in the event together with the medics and agrarians.

The charity event included a “Buy an Icon – Save a Life” activity – sale of unique icons painted by Kyivan artists Oleksandr Klymenko and Sofia Atlantova on elements of ammo boxes brought from the Anti-Terrorist Operation (ATO) zone in eastern Ukraine. The event was accompanied by Chorea Kozacky, a group that performs ancient Ukrainian music.

According to the PFVMH leader and cofounder, Gennadiy Druzenko, it is too soon to say finally about the exact total amount raised through the sale of icons and cash donations. “However, we expect that after all settlements for purchased icons are effected, this amount will be about UAH 250,000,” he said.

It is worth mentioning that earlier the PFVMH’s “Buy an Icon – Save a Life” campaign, which lasts for more than a year and a half, already brought over UAH 1 million for the volunteer hospital. Today, icons of by the Kyivan artists adorn offices of Ukrainian and European MPs, business people and private art collectors, and the premises of museums, galleries and embassies. The collection was exhibited in the European Parliament, the Lithuanian Seimas, the Ukrainian Verkhovna Rada, the Lithuanian Embassy in Ukraine and the Ukrainian Embassy in the Netherlands, as well as in many European and Ukrainian cities.

Both Druzenko and one of the authors, Oleksandr Klymenko, called the last event very successful. Over 20 icons out of 50 exposed were sold, the lion’s share being bought, at their own expense, by the Svarog West Group’s top managers – the heads of departments and farms. The publicity that the event has brought about due to the presence of both the media and invited guests should not be underestimated, too, because no fundraising is possible without promotion.

The partnership of the PFVMH with Andriy Hordiychuk, who is also the Chairman of the Supervisory Board of the Strengthening Communities Foundation and the Chairman of the First National Agricultural Cooperative, began two years ago. Druzenko says that he and Hordiychuk are old acquaintances. In November 2014, when the volunteer hospital was nearly formed, Druzenko visited Hordiychuk in Khmelnytsky, presented the project and said that they had not enough money to launch it in practice. “And then, they took a decision within the Svarog West Group – and it is a team of five thousand people –to cancel their New Year corporate event and give us all the money thus saved,” the PFVMH leader recalls.

Tetiana Vasylyk, Strengthening Communities Foundation Director, has put it more accurately, saying that not only the corporate event but all festivities of the Svarog West Group that winter were canceled. As a result, UAH 1.2 million deducted from the corporation’s profit and voluntarily contributed by its individual staff members was transferred to the mobile hospital via the charitable foundation.

“It was a decision taken by the team as a whole,” Vasylyk emphasizes. “We saw that the project was efficient. Almost every family has relatives who have been in the ATO zone, and health is probably the main concern of each of our coworkers. That is why the decision was taken to support the medical project in the ATO zone.”

According to the charitable foundation director, the corporation channeled another UAH 2 million toward an unprecedented peaceful project implemented by the PFVMH – independent Ukraine’s biggest cardioscreening of Khmelnytsky Oblast residents, which covered 22,433 persons in the oblast’s 565 localities.

Vasylyk also noted that the PFVMH is not the only recipient of the corporation’s assistance to defenders of Ukraine. Since the beginning of the war, the Svarog West Group has spent, in addition to the abovementioned UAH 1.2 million, about UAH 10 million on upgrade of military equipment and purchase of ballistic protection and essentials for soldiers, night-vision devices, military clothing and many other things.

As to the icons individually bought by the company managers during the charity event, Vasylyk said she thinks that these icons are important and needed “as a very special symbolic guardian of people and their relatives, who have been in the ATO zone, as an echo of the times when actually a prayer and belief sometimes save people’s lives.” She also stressed that “in the first place it [purchase of icons] was an absolutely conscious endowment to support a good cause.”