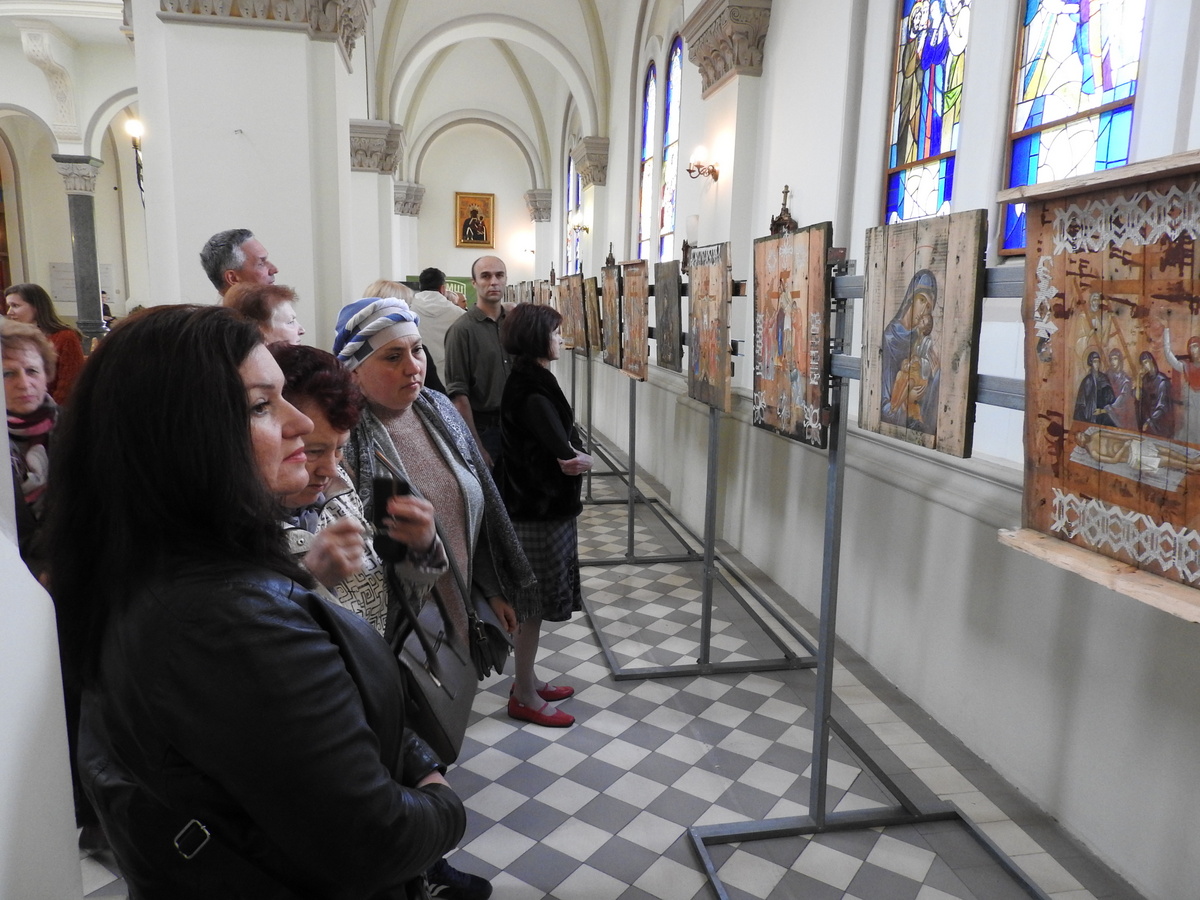 After being displayed in Kyiv’s St. Sophia Cathedral, the “Passiones/Passion” exhibition of icons by Kyivan artists Sofia Atlantova and Oleksandr Klymenko has moved to Kyiv Oblast’s city of Fastiv, where it was open today in the Exaltation of the Holy Cross church.

During the Sunday service, Fr. Mykhaylo Romaniv, the dean of the Roman Catholic parish in Fastiv, invited his parishioners to visit the exhibition: “Come, stand before these icons, pray, and plead for Ukraine.” Giving the floor to Oleksandr Klymenko, he also thanked the artists: “My great gratitude to you for that these saints look at us through the prism of the pain our country is experiencing.”

The new series of Icons on Ammo Boxes as part of the joint initiative with the PFVMH, “Buy and Icon – Save a Life,” was painted in commemoration of those killed in the Russian-Ukrainian war. According to the authors, the exhibition is dedicated to the fifth anniversary of the official beginning of the war in Donbas. “With these icons, we want to remind that the war has been continuing for the fifth year,” Oleksandr Klymenko said in a speech, addressing the parishioners.

The opening ceremony included handing the Defense Ministry’s medal “For Assistance to the Armed Forces of Ukraine” to PFVMH driver/paramedic Volodymyr Osetsky, who lives in Fastiv. The medal was handed by PFVMH Vice President for logistics Ihor Buyvol.

Fr. Mykhaylo Romaniv also collected donations to the PFVMH from the parishioners who attended the exhibition.

It is the second time that the Exaltation of the Holy Cross church hosts an exhibition of Icons on Ammo Boxes by Sofia Atlantova and Oleksandr Klymenko. In late 2017, the Illovaysk Deisis series by these artists was displayed in the church.

“Buy an Icon – Save a Life” is an art project of Kyivan artists Sofia Atlantova and Oleksandr Klymenko aimed to support the Pirogov First Volunteer Mobile Hospital, a non-government project that employs civilian medics to provide medical aid to both militants and civilians in the Joint Forces Operation zone in Eastern Ukraine.

Photo album “2019/05/12, Fastiv, Kyiv Oblast. Opening of the “Passiones/Passion” exhibition of icons on ammo boxes in the Exaltation of the Holy Cross church”