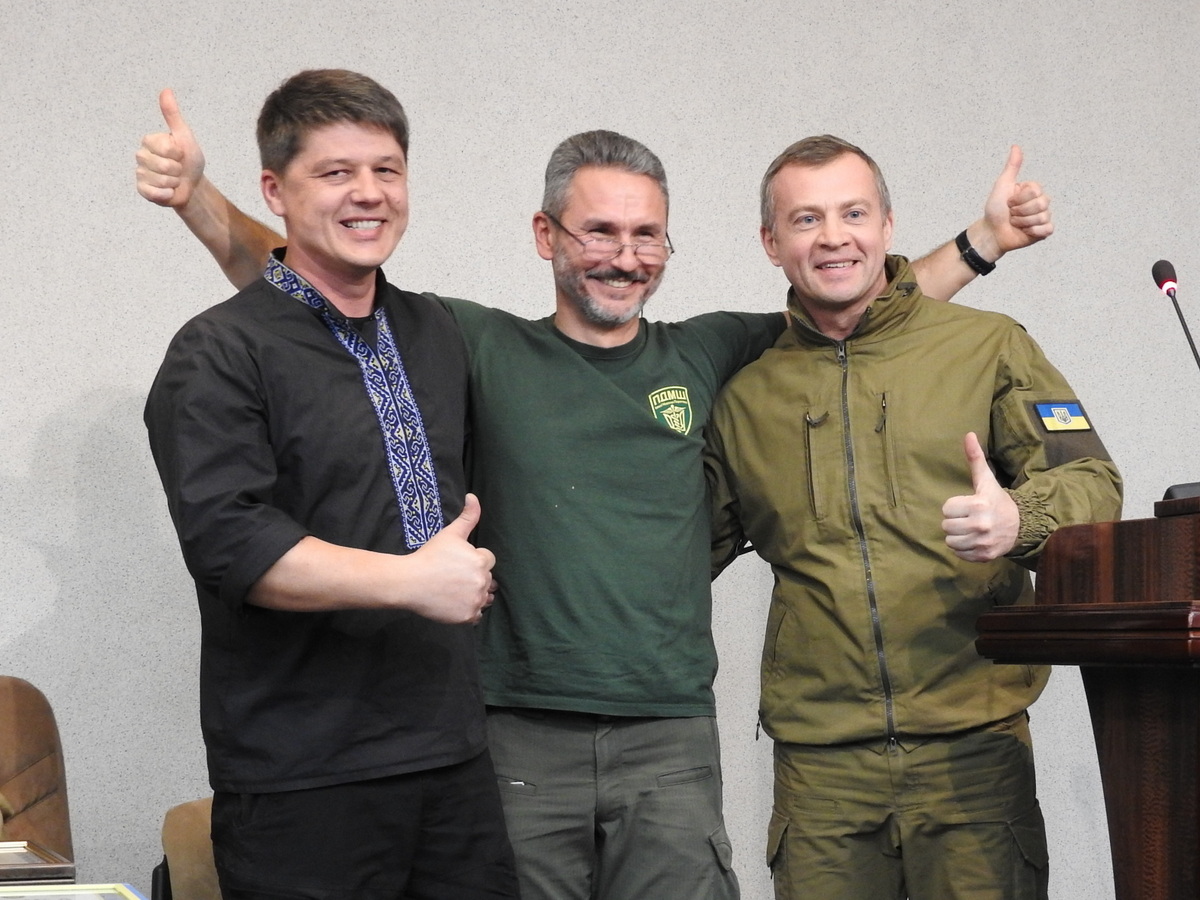 PFVMH a unique phenomenon of civic engagement and self-sacrifice

On Saturday, Dec 15, 2018, in the Express hotel conference room, the Pirogov First Volunteer Mobile Hospital celebrated its fourth anniversary. Over the four years at the front, the mobile hospital varied out 44 monthly missions, during which 480 volunteer medics provided care to 50,000 patients in 49 locations in the zone of Anti-Terrorist Operation / Joint Forces Operation in Eastern Ukraine. “We treat people not only physically. We treat both in word and in deed,” PFVMH President Oleh Shyba said in his opening speech. “And it is our great plus. Every medic, every driver involved in the PFVMH project contribute greatly to the development of our country.”

A lot of awards were handed during the event, both “fresh” and those that had long waited for a meeting with their heroes. On this occasion, the PFVMH head jokingly said, “If anybody tells you that you go to the East for decorations, give them my phone number and I’ll take them there for those decorations.” PFVMH Vice President and Medical Director Dmytro Vernyhor thanked PFVMH veterans. “There are people among us who are at the front from the first days. You can or cannot understand them, but they inspire respect of both their PFVMH colleagues and those to whom they not just do good but give a chance to live,” he said. In heir speeches, the hospital’s leaders noted that nobody could even think four years ago that the war would last so long. PFVMH Supervisory Board Chairman Gennadiy Druzenko said that journalists once asked him about his dream. “Actually, my dream is very simple: that the PFVMH becomes history and we have the moral right to hand our battle standards to a museum and remain a big family in which all help each other in their civilian lives and everybody are in his or her place.” Unfortunately, according to him, it won’t happen soon. He also once again recalled “complicated” relationships between volunteers and the military leadership of the country. “It’s a pity that our authorities underestimate this volunteer movement,” said Oleksandr Hahayev, PFVMH Vice President in charge of liaison with the Armed Forces of Ukraine and law enforcement agencies. “I’ve recently met with the first deputy secretary of the National Security and Defense Council, Col. Gen. Mykhaylo Koval, and he asked me about our statistics. I have the statistics from June last year through October this year. Our crews saved 150 lives of wounded and evacuated 19 shell-shocked soldiers. There were 97 cases of primary surgical management of wound and 50 surgical interventions. Consultations were provided to 1,115 people and 279 were hospitalized. Outpatient treatment was provided in 2,911 cases.” The celebration did not go without the “eternal” question that PFVMH members often hear in private conversations: “Why do doctors go on PFVMH missions to the East?” Hennadiy Syabrenko, head physician of the Oblast Clinical Hospital for War Veterans in Kropyvnytsky, answered it quite briefly and to the point: “Because work on the mission is like a gulp of fresh air.”

The volunteer medics were also congratulated by guests – their blood brothers. Serhiy Kononenko (“Professor”) and Oleksandr Lambursky (“Moryachok”) conveyed greetings from the 30th Konstanty Ostrogski Mechanized Brigade. While so doing, the formers performed a few of his songs and the latter read own verses. On behalf of the Ukrainian Volunteer Army and the Governmental Initiative of Yarosh, a CSO, the greetings were delivered by cyborg Andriy Sharaskin (“Bohema”) and the captain of the Ukrainian team at the Invictus Games, Serhiy Ilnytsky (“Sokil”). Vladyslav Tychyna greeted the PFVMH on behalf of the Volnivakha District CIMIC. After the event, he wrote in his Facebook: “The PFVMH MedStar Medevac’s contribution to ATO and JFO is invaluable. In my view, they are a unique phenomenon of civic engagement and self-sacrifice. All of them are motivated volunteers with a strong stand who spend their own time, health and strength for the good of Ukrainian people, doing this at the call of their own heart. Bow low to you, and all honor!!! Strong together!!!”

Traditionally, a performance by Chorea Kozacky band, good friends of the PFVMH, crowned the celebration.