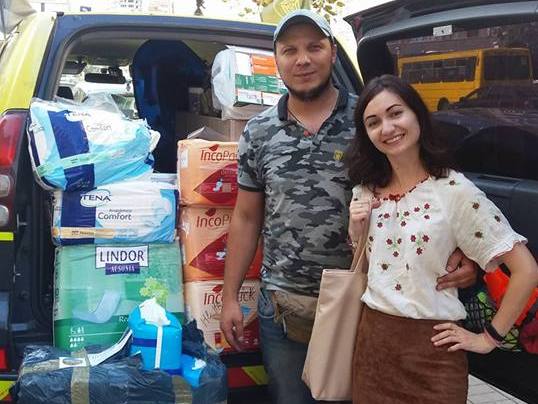 Today, the Pirogov First Volunteer Mobile Hospital received the second bundle of volunteer assistance from the Ukrainian community of the Basque Country in Spain: medicines, hygroscopic materials, clothes and diapers, PFVMH doctor Olena Horopko reported. She said all these items were delivered by volunteer Olha Batahova for further dispatch to Eastern Ukraine.

Olena said that exactly one month ago Olha found her in Facebook and offered assistance to the PFVMH. As soon as the next day, there came the first “tranche” of assistance, as Olena called it. A part of it was soon brought to Luhansk Oblast’s Popasna Central District Hospital and delivered to its head physician. The other part was given to the PFVMH medevac teams, which reinforce battlefield medicine service within units of the Armed Forces of Ukraine deployed in the Anti-Terrorist Operation zone.

According to PFVMH Vice President for Logistics Ihor Buyvol, exact destination of the assistance received today has not been decided as yet. Most probably, it will be also distributed among civilian medical institutions and the medevac. One thing that can be taken for granted is that it will go to people in Eastern Ukraine who need it.