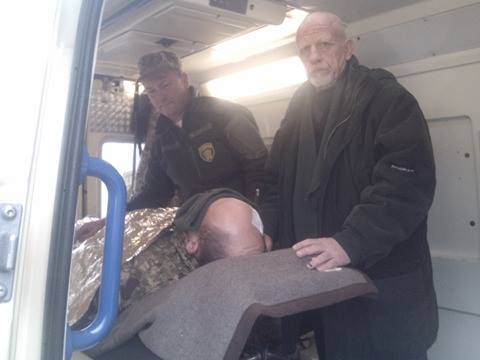 Right now medics of the Pirogov First Volunteer Mobile Hospital (PFVMH) are transporting a wounded defender of Ukraine to the Neurosurgery Institute in Kyiv, PFVMH Commander Oleh reported by phone. He said the volunteer hospital’s ambulance “Stryianka” has just got out of a traffic jam resulting from an accident after Poltava.

According to Shyba, the warrior got wounded to his head by an anti-tank guided missile splinter near Popasna on Nov. 6. He was operated in the Popasna hospital and moved to a hospital in Kharkiv. The PFVMH was approached with the request to transport him to Kyiv by volunteers who had found information on the PFVMH through Facebook.

Presently, the 20th rotation personnel of the hospital in the Anti-Terrorist Operation zone is based in civil hospitals in Donetsk Oblast’s Volnovakha as well as Luhansk Oblast’s Popasna, Novoaydar, Schastya and Stanytsya Luhanska. Shyba estimates that since early November, when the current mission began, the PFVMH’s medics have provided aid to roughly half a thousand patients, both civilians and servicemen.