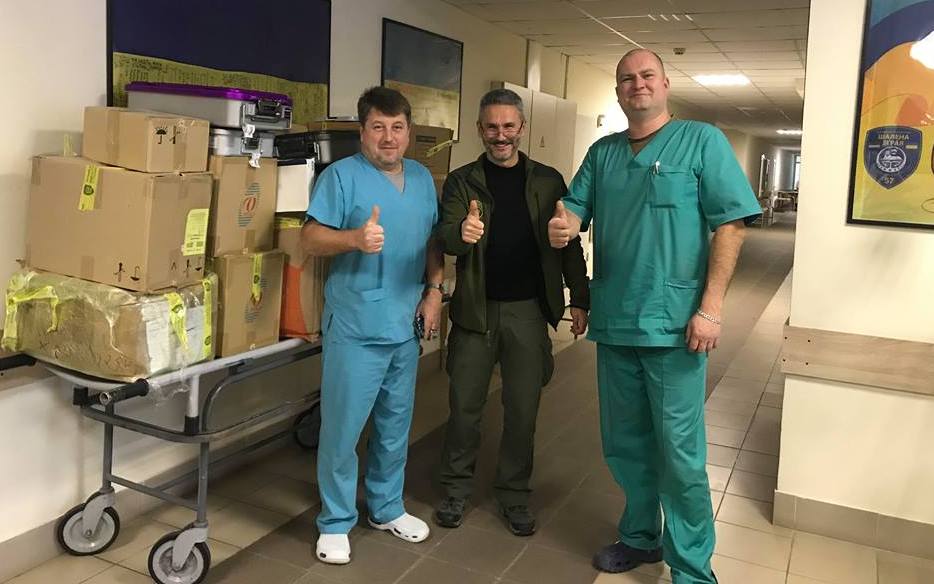 PFVMH transfers surgical tools from America to hospital in Kropyvnytsky Yesterday, the Supervisory Board chairman of the Pirogov First Volunteer Mobile Hospital, Gennadiy Druzenko, brought a parcel of surgical tools, received from one of the United States’ Ukrainian communities, to the Oblast Clinical Hospital for War Veterans in Kropyvnytsky. The PFVMH leader also fetched along some medicines from the mobile hospital’s stock in Kyiv.

“The parcel is super!” the Kropyvnytsky hospital’s head physician, Gennadiy Syabrenko, appreciated the present from the benefactors. “Not only for us but also for some of our collateral health care institutions and warriors. Now we are concurrently forming a party to go to the frontline. And Druzenko brought certain preparations that we need right now.”

The tools for general surgery, laparoscopy, neurosurgery, and resuscitation were sent by ethnic Ukrainian American Jaroslawa Francuzenko and St. Olga Sisterhood within the parish of St. Andrew Ukrainian Orthodox Cathedral in Maryland. “It must be their fourth or fifth parcel sent to the PFVMH,” Druzenko said. He said he met Ms. Francuzenko before the war when he conducted a study in the United States under the Fulbright Program in 2009-2010. There, the future PFVMH cofounder lived with his family, and they went just to that parish, the main Orthodox parish in and around Washington, to attend the service.

“I don’t remember how she found me after the war began. It was when I identified her later that we found out that she was the very Pani Jaroslawa whose splendid vyshyvankas we had admired so much then in America,” Druzenko recalled.

Unlike it had been with the previous parcels, this time the Sisterhood accompanied their charitable with a request that it would be given to a military hospital. “We brought the tools to Kropyvnytsky because we are certain that here it will be used at 100 percent efficiency,” Druzenko explained the hospital choice. He also added that the Oblast Clinical Hospital for War Veterans is the basic medical institution for the legendary Third Regiment of Special Operation Forces, which defended the Donetsk Airport in 2014-2015.

Syabrenko confirmed Druzenko’s words. “In the [Kirovohrad] Oblast, there is no other military hospital or medical unit that would care of participants in the Anti-Terrorist Operation / Joint Forces Operation, numbering 15,000 in the Oblast. Our hospital is on the second line of the provision of medical care to Ukrainian warriors and their medico-psychological rehabilitation.”

Photos from Facebook of Vadym Nikitin, head of the ATO Participants Assistance Center at the Kirovohrad Oblast State Administration, are used in this story.