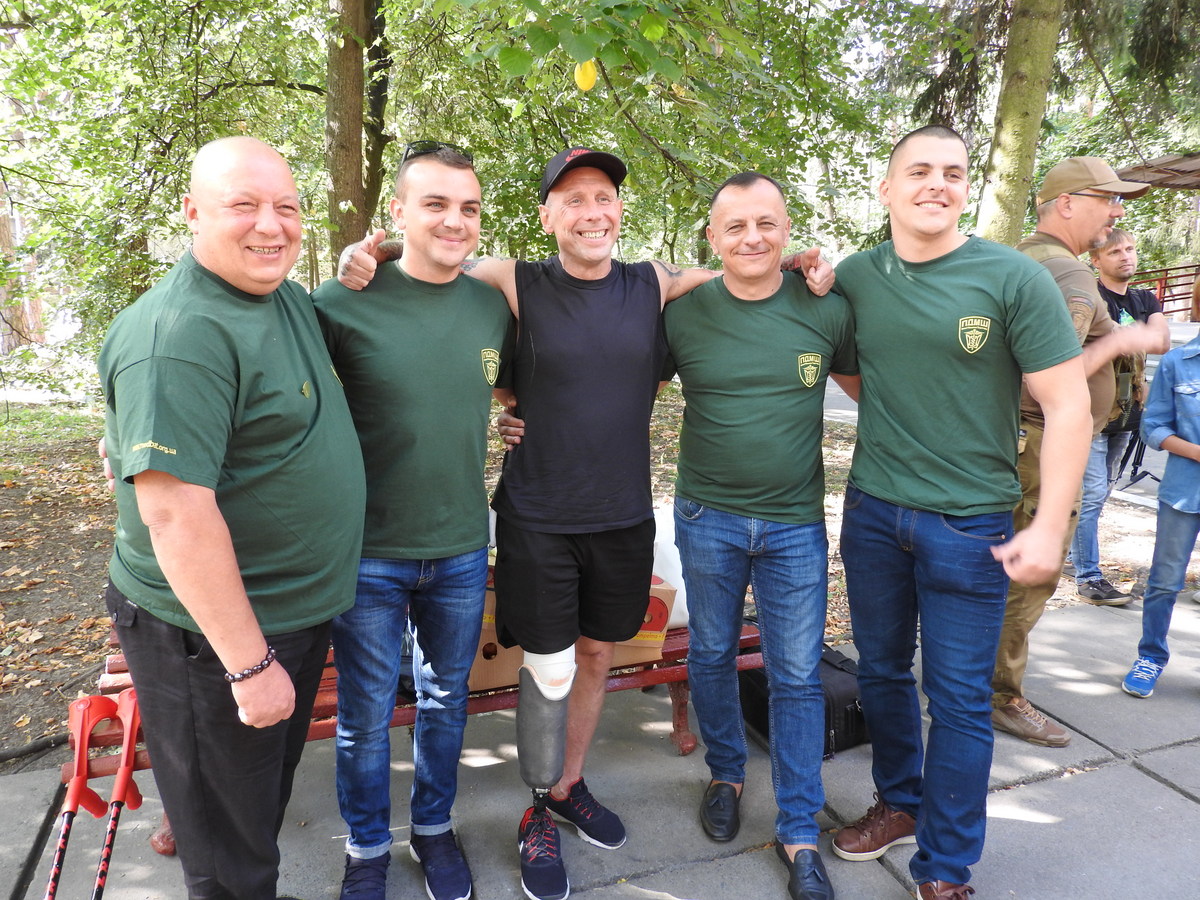 On Friday, Sep. 13, members of a medical evacuation crew of the Pirogov First Volunteer Mobile Hospital accompanied by a few media representatives came to the Irpin Military Hospital near Kyiv to see Dmytro Herzhan. Dmytro, a soldier of the 74th Scout Battalion, got a severe injury during the Security Service of Ukraine operation bringing pro-Russia militant Volodymyr Tsemakh, allegedly involved in MH17 downing, to the government-controlled territory and was evacuated by four PFVMH medics from Vinnytsya. They include driver/orderly Andriy Sirak, paramedic Serhiy Poberezhny, orderly Andriy Nechyporuk, and orderly Stepan Sirak. “We came to see our brother in arms, nom de guerre Tryton,” Andriy Sirak said. “Not long ago, during the operation of capturing Tsemakh and bringing him to the government-controlled territory, there happened a clash. These scout guys needed help. We were in the place and time when it was needed.”

Andriy Nechyporuk specified the time and place: June 27, Maryinka near Donetsk. “We were called as usual: there are two bad 300s [wounded]. We came, took [one], gave him the first aide, and brought him to Kurakhove. The one, thank God, is alive and healthy,” Nechyporuk summarized that day’s events. “We went as a crew, all four of us, each having his own functions. That’s why we’re a team. Everything was well organized, we worked in coordination, and the main thing is that we did everything promptly and adequately,” he added.

The evacuation point in Maryinka is almost on the line of contact. However, as Nechyporuk explained, going in fact to the battlefield was made necessary by having two seriously wounded: “We had to take away the second one promptly and so we had to go to the evacuation point. We went in our ambulance, which has been at war for the sixth year now.”

“The medical company took care of the first wounded, the heaviest, who, sadly, has died,” said Serhiy Poberezhny. “We carried Tryton, hospitalized him in Kurakhove. Next day, the third participant in the operation came to us, blast contused. Perhaps, he had been in shock on the first day and didn’t understand what troubled him. We provided medical aid to him either and also hospitalized him in Kurakhove.

“On our way, he told us what had happened. Staff Sergeant Serhiy Kolodyazhny of the 74th Scout Battalion had been the first to advance. He encountered either a trip mine or an anti-personnel mine. Tryton – soldier Dmytro Herzhan – rushed to help but also stepped on a mine. Kolodyazhny was laying on the ground and thus he took almost all splinters. Herzhan had his leg torn off. So the third participant was first to provide first premedical aid to his blood brothers: he applied tourniquets.” Later, in an interview to renowned journalist Andriy Tsapliyenko, he added that besides the traumatic amputation of his right leg, Tryton also had an injury of his right hand and multiple injuries of his body and face. “The main thing was to stabilize his condition. We could not stay long at the evacuation point: everything had to be done fast because we were under fire. We needed a few minutes to give him first aid and then began evacuating him to our medical company for fuller assistance. From there, we brought him to Kurakhove for specialized medical care.”

When the PFVMH crew returned from Kurakhove to their place of location, they were told that it had become known from a radio interception about an order of the enemy to liquidate the ambulance. As Andriy Nechyporuk presumes, they on the other side could think that just this vehicle would be carrying Tsemakh from the line of contact and therefore they wanted to liquidate the key witness along with the ambulance. That very day, the volunteer medics from Vinnytsya also provided medical care to the person because of whom they had been close to being killed. “When we returned from Kurakhove and began refreshing our stock and washing the ambulance from blood, I and Serhiy were approached by the battalion commander who told us that two medics were needed,” Stepan Sirak told Andriy Tsapliyenko. “He didn’t say where and why. We took necessary things and went to the porch. A Volkswagen Transporter pulled into, from which an unknown person with a sack on his head was escorted out. We measured his blood pressure, examined. It was clear that he was in an inadequate state. He had light bleeding on his head. Serhiy asked him what was his normal pressure, He didn’t understand Ukrainian so then I asked questions in Russian. We bandaged his head and he was taken away.”

Asked about their attitude toward the exchange of Tsemakh for Ukrainian POWs and political prisoners kept in Russia, both Andriy Nechyporuk and Stepan Sirak answered nearly word for word, suggesting that the issue had been discussed earlier: if his price was 35 our prisoners, who had been actually released for him, it’s worth it. As is customary, the guests from Vinnytsya did not come to see their blood brother empty-handed but brought fruit and goodies as well as moonshine in a souvenir bottle with “Tryton” inscription. Dmytro Herzhan was also given as presents inscribed flags of the PFVMH and MedStar Medevac and a PFVMH-branded T-shirt.

“Thank God, this man is alive, and today we are seeing Tryton. Perhaps, this is the main, most important, thing that can be in this life: that today we can shake hands with him,” Andriy Sirak said.