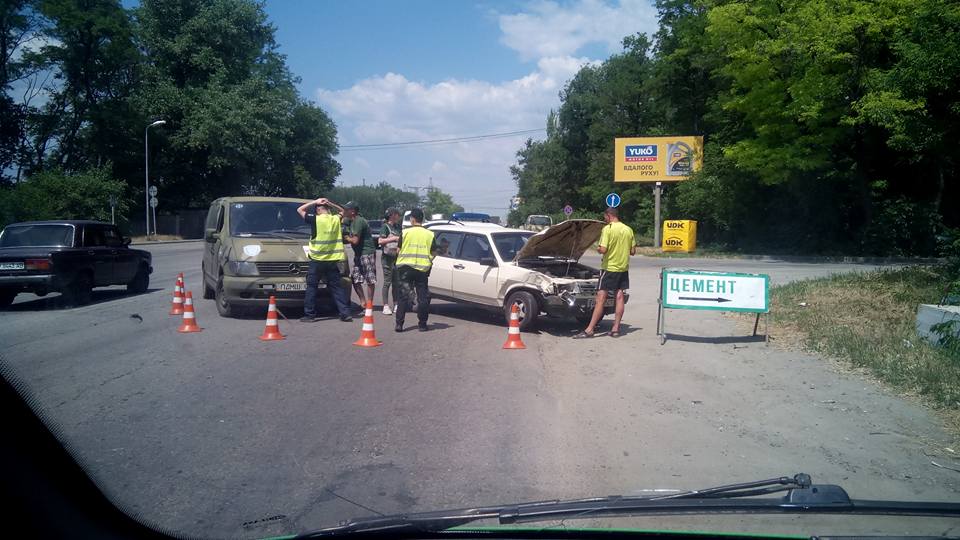 Any road accident is at least a very annoying occurrence. However, what happened after the accident with one of the Pirogov First Volunteer Mobile Hospital’s vehicles has become one more illustration of the impressive phenomenon in present-day Ukraine: the volunteer movement and volunteers’ brotherhood.

En route from the Joint Forces Operation zone, having just entered Zaporizhya, the PFVMH’s Mercedes Vito collided with a VAZ-2109. It happened at lunchtime the day before yesterday, but as soon as yesterday, both vehicles were repaired, and somewhere between 5:00 p.m. and 6:00 p.m., the medical “Vitos” continued its journey to Kyiv. “I have already been in Zaporizhya several times,” says PFVMH Executive Director Tamila Danilevska, who was a passenger. “This time, I was impressed not so much by the nice and majestic city itself as by its residents the fate brought us together. I met wonderful people – real patriots dedicated to their cause.”

Two young policemen who came for the accident were the first to impress Tamila: “Once they learned who we were and where we were going from… Well, I’ve never seen such care! They instructed us, found telephones of local volunteers and helped us contact them. The volunteers arrived on the accident scene just in 15 minutes.”

Volunteer Umid Dzhurakulov arrived first, and then the rest moved in: Vitaliy Lavrov, car mechanic Vasyl, car body straightening specialist Oleksandr and others. A decision was taken to repair the “Vitos” as well as raise money and repair the “VAZ-Nine.” The Zaporizhya volunteers distributed tasks among themselves: who would repair which vehicle and who can help and how. They called a tow truck, which took the Mercedes to a repair shop. Next day in the morning, Umid announced fund raising on Facebook – UAH 15,000 was lacking. “And they did all this even though we had never met any of these volunteers before!” Tamila says.

While the vehicles were in the care of specialists, the PFVMH members were brought to the Volunteer Center “Soldiers’ Camp” near the railroad station. “It’s a place where you can relax, have some sleep, take a shower, wash and iron your things as well as have a tasty meal,” Tamila explained. “It is homelike, and the people there are nice and good. We were treated as relatives or close friends… And while we were staying there, the vehicles were repaired. And the “Vitos” was repaired free!” We sincerely thank Umid Dzhurakulov and his wife Yulia, who has been volunteering since the beginning of the war. “Wonderful, delicate people. They cared of our vehicle all the time from arriving on the accident scene to the moment when we continued our trip in the repaired vehicle,” Tamila said.

We are grateful to Vasyl, thanks to whom our “Vitos” was able to move on. Vasyl is well known in military units, because his skilful hands reanimated more than one dozen military vehicles.

We thank Viktor, owner of the Ukrop café, for his support, and also all those who were not indifferent and answered the call!