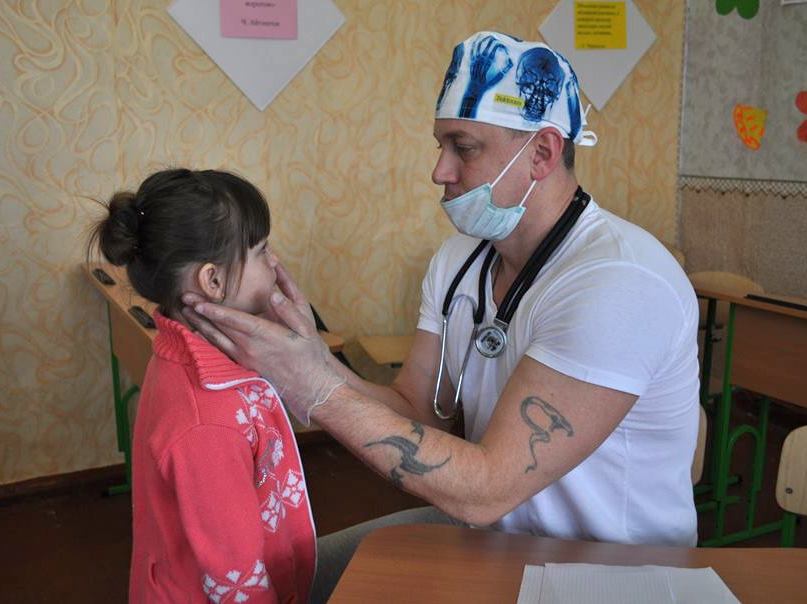 During the second special mission of the Pirogov First Volunteer Mobile Hospital in Luhansk Oblast’s Popasna, seven PFVMH doctors have examined 436 children in four days. According to pediatric surgeon Serhiy Petryk, these children are pupils of one preschool and three general education schools. “In addition, we’ve also examined about 20 children who do not go to these institutions. We began every morning by examining such ‘unplanned kids’ brought independently by their parents to the hospital where we lived,” he said.

The school in which the doctors worked the last day is near the front line and has got under shelling of the Russian forces three times since 2015. “Today, when we already left the school and were making our farewells with its principal, we also heard shooting,” Serhiy said.

The volunteers are coming home not empty-handed. Each of them received a good-job diploma from the acting chief of the Popasna District State Administration Health Department, Olena Kostrova, along with her thank-you letter addressed to the head of the organization that employs the doctor, as well as an acknowledgement certificate from the Popasna District Central Hospital head physician, Oleksandr Kovalchuk.

“In return, the PFVMH also thanks Olena Kostrova and Oleksandr Kovalchuk for creating proper conditions for the doctors to work, and for their complete assistance and support of our mission,” Petryk said. “Only by joint efforts we will be able to change Ukraine for the better.”

He said the gratitude to the PFVMH doctors was also expressed by the Popasna children’s parents, of whom 99.9 percent gave their consent to examination by PFVMH medics. “We didn’t pull the kids by force – all were brought [to the examination] with the consent of their parents. There were just one or two refusals in each of the institutions. We don’t know the reasons behind the refusals.”

What do the doctors feel while coming back home? “Satisfaction from the work done, satisfaction from being able to help where our help was needed. And sure, fatigue, because in these four days we did a colossal volume of work,” emphasized Serhiy Petryk. He added that also worth keeping in mind is that one of these days the PFVMH doctors had to work, in fact, round the clock, as all seven of them were involved in treating and evacuating four Ukrainian soldiers injured in an explosion and fire.

The preventive examination of children in the Popasna preschool and schools from March 20-23 was a continuation of the initiative launched by the PFVMH a month ago, when nearly 300 children were examined in Popasna within two days. The idea of such “pediatric landing parties” of volunteers belongs to Kyivan Serhiy Petryk, who works at the National Children Specialized Hospital “Okhmadyt” and the medical network “Dobrobut.” This time he was joined by Maksym Makarenko, MD-PhD, from the iStomatolog family dentistry center in Kyiv, Andriy Kukulyak, dentist of one of Kyiv’s private clinics, Serhiy Maksymov, pediatrician, head physician of the Kolomiya Central District Hospital, Volodymyr Melnychuk, pediatric neurologist, head physician of the Kolomiya City Primary Care Center, Olena Horopko, clinical resident at the Shupyk National Medical Academy of Postgraduate Education and a family doctor in Kyiv, and Oleksiy Holubenko, intern, pediatric surgeon under third-year training at the Bohomolets National Medical University, Kyiv.

Today, Ukraine-controlled areas of the Anti-Terrorist Operation critically lack medical and paramedical personnel, both in the temporary locations of military units and in civil hospitals near the front line.