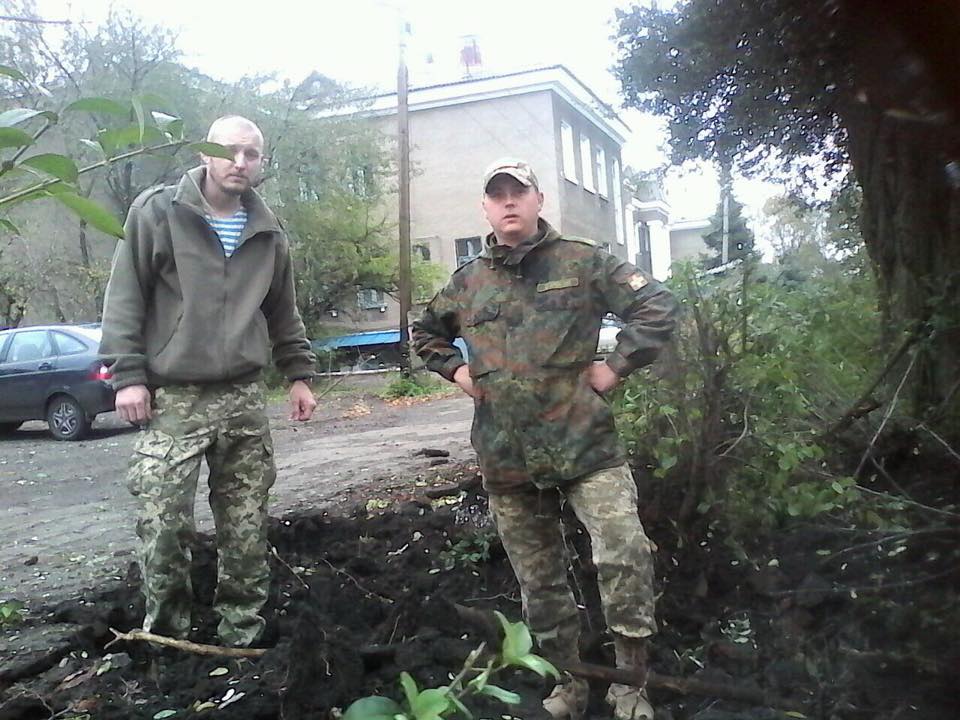 On late night of Oct. 15, Russian terrorists extended their traditional “truce shelling” to central parts of Popasna, Luhansk Oblast, including the Central District Hospital, which was far away from the positions of the Ukrainian army. Surgeon Dmytro Pozharsky and anesthesiologist Viktor Belilovets, doctors of the Pirogov First Volunteer Mobile Hospital (PFVMH), who are in the East as part of its 19th mission, have reported on what happened that night.

The terrorists started gunning after 11:00 p.m., just after the doctors have gone to bed. According to Dmytro and Viktor, the gunfire sounded much more intensive and closer than usual. The shell bursts broke windows, interrupted power supply (restored in the morning), and damaged a gas pipeline. “There was a very strong odor of gas. Had a second shell hit the same place, a half of the hospital might have been demolished,” the volunteer medics say.

The doctors lit candles and distributed them among nurse posts. The walking patients were in the hallways, and the beds of those unable to walk were moved as far from the windows as possible. Their personal feelings were, “We mostly worried about patients, especially the lying-down cases, whom it would be difficult to transport to the basement, the more so in the dark.”

(Alas, several Ukrainian wounded soldiers, blown up by landmine, were brought to the hospital later.)

In the morning, Dmytro and Viktor counted five holes produced by SPG shells of various calibers, including 152 mm, around the hospital. The closest was 20 meters from the hospital.

Taking into account the targets of Russian air strikes in Syrian Aleppo, we can state that shelling and bombing of hospitals is a “Russian brand style” of warfare.

International law expert Gennadiy Druzenko, PFVMH cofounder and leader, suggests holding next troops disengagement talks in the Popasna hospital rather than in Minsk: “Then the parties would get it right that agreeing on any truce or ‘disengagement of forces and facilities’ with the aggressor, who daily wipes his boots on the founding principles of the UN Charter and international humanitarian law in Ukraine, Georgia, Syria, etc., is always a trap and a way to having new victims. If we still have not a war but an ‘antiterrorist operation,’ it will be worth recalling a time-proved maxim, ‘We don’t negotiate with terrorists,’ and just abide by it.”

Published below are photos made today by Dmytro Pozharsky and Viktor Belilovets. Videos shot by them during the shelling are posted on Facebook: