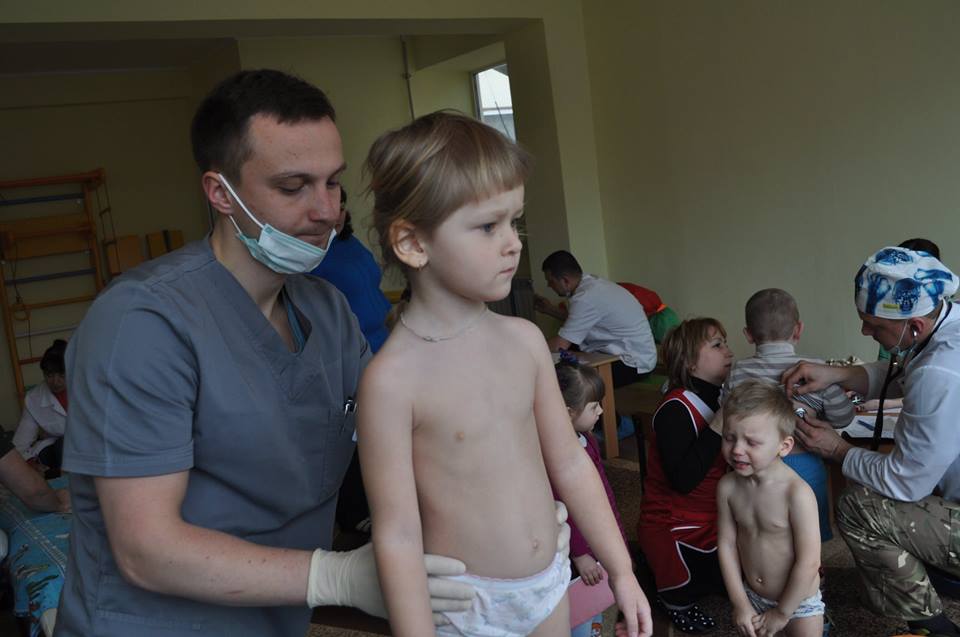 Today in Luhansk Oblast’s Popasna, a team within the Pirogov First Volunteer Mobile Hospital carried out a preventive examination on 96 pupils of the city’s largest preschool, the spearhead of such “pediatric landing parties” reported.

“We arrived today at 8:00 a.m. at Kostyantynivka, from where a PFVMH vehicle brought us to the Popasna Central District Hospital,” Petryk said. “There we discussed our action plan, and as soon as 11:00 a.m., we began examining kids in the preschool. We worked until four.”

Today’s preventive examination is a continuation of the initiative launched by the PFVMH a month ago, when nearly 300 children were examined in Popasna within two days.

Tomorrow at 9:00 a.m. the PFVMH pediatric mobile team will go from the Popasna hospital, which has accommodated the “magnificent seven,” to a school. However, the parents of some of children, who missed the examination last time, have learned about the second party and ask the doctors to consult them right in the hospital, before they leave for their workday. “They contacted us by phone, via Facebook, through Popasna hospital staff,” Petryk said.

Ukraine-controlled areas of the Anti-Terrorist Operation critically lack medical and paramedical personnel, both in the temporary locations of military units and in civil hospitals near the front line.

“There is no service of pediatric specialists on duty round the clock in this city of 20,000 inhabitants. So we were ready for not only the preventive examination but also, if need be, provision of immediate medical aid,” Petryk noted.

On the Thursday night the mobile team is leaving for home.