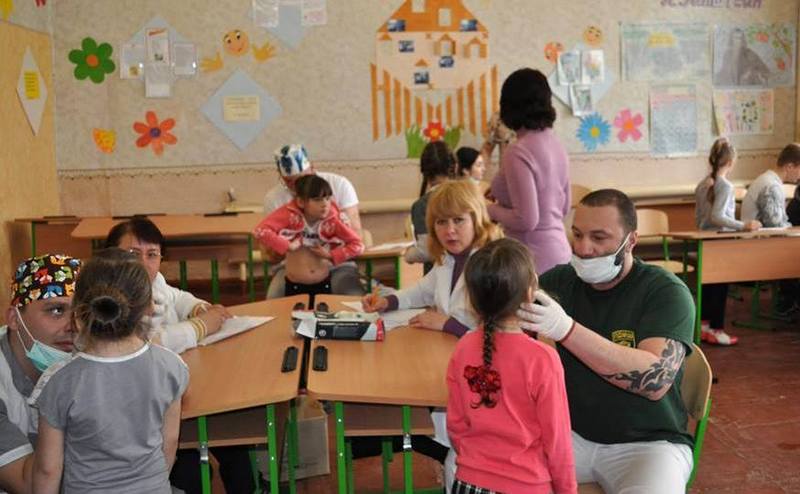 Why do we work with civilians in Eastern Ukraine? – PVFMH President Gennadiy Druzenko

In brief, it is our war for the future of Donbas. Moscow and the self-proclaimed fake republics of L/DNR fight to set back the clock of history, trying to resurrect the deceased USSR. Ukrainian warriors fight for today’s Donbas, its land, cities and villages. Volunteer medics of the Pirogov First Volunteer Mobile Hospital fight to win hearts and minds of local residents, first and foremost children, on whom the future of Donbas depends.

Because why would we need this land if those living on it treated Ukraine as their stepmother, not the dear own one?

And there still are a lot of reasons for the locals to see Kyiv as their stepfather. Let’s leave alone information policy, or rather its absence, and speak of health care. The official statistics is crying:

In Ukrainian government-controlled districts of Donetsk Oblast the situation is similar.

After that, will you ask why the locals in Donbas have not much love for Ukraine and feel nostalgic for the USSR?

A time will hopefully come when we will be able to regain Donbas, however, as wise Napoleon said, “You can do anything with bayonets except to sit on them.”

We value Ukrainian bayonets, but we are fighting on our medical front, first and foremost, for the soles and hearts of people living in Donetsk and Luhansk Oblasts. If we – Lord forbid! – lose this battle, we in Donbas will have to sit on bayonets, eat from bayonets, and go to toilet with bayonets for a long time.

What Donbas will be in the future is not decided by diplomats in Minsk, politicians in Kyiv and event the military in the General Staff – it is decided by medical landing parties of the PFVMH, which work along the entire front line.