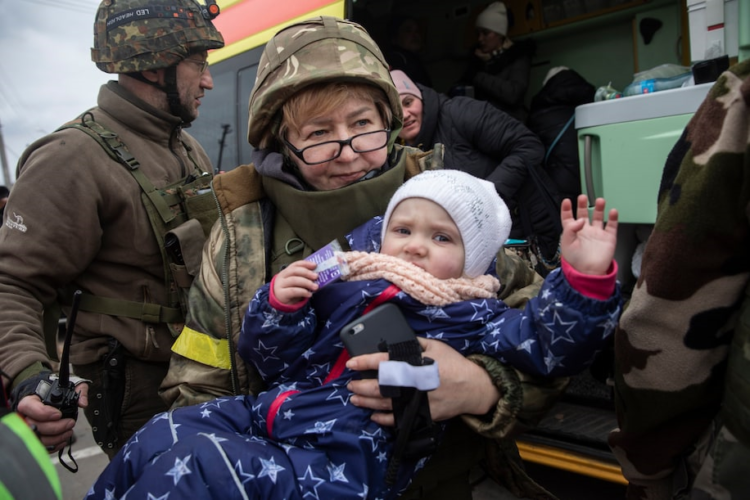 The Washington Post yesterday told about four Ukrainian women who had not left Ukraine because of the muscovite plague but stayed to defend the country. The article, “Ukrainian women stand strong against Russian invaders,” unfolds with a story about the fantastic nurse of PFVMH, Viktoria Kramarenko.

Crowds of terrified civilians scrambled under a destroyed bridge, shellshocked, gasping for breath and sobbing. Many had walked for miles. Some carried the elderly on their backs or in their arms. They clutched children, pets and whatever belongings they could manage.

Viktoria Kramarenko’s job was to help them survive this leg of their perilous journey.

A volunteer medic, she has spent the last three weeks on the front line in Irpin, the city north of Kyiv where a Russian assault killed many people, destroyed homes and cut off phone and Internet service. Her parents are among those still inside.

While on rescue missions, she has come under fire, built a bridge out of rope to ferry urgent supplies and assisted severely traumatized civilians. Each day, her ambulance makes dozens of trips between the bridge and a checkpoint nearby where the rescued rest and regroup.

The horrors of the experience have changed her.

“I realize that I’m ready to tear the enemies’ throats with my teeth,” she said. “Each and every one of us will do that to them. And the land will burn under their feet.”

Kramarenko, 55, a medical assistant who worked at a burn hospital in the capital, began to volunteer as a wartime medic in the country’s east in 2015, using her vacation time to treat wounded soldiers and civilians on the front lines of a military conflict with Moscow-backed separatists.

When Russia invaded Ukraine last month, she quickly launched a crash course in battlefield medicine for new members of the Territorial Defense Forces — many of whom joined the fight without any combat experience.

But when Russia ramped up its assault on the outskirts of Kyiv, her work moved to the smashed bridge separating the city from her hometown of Irpin. Fearing a Russian advance on the capital, Ukrainian forces destroyed the bridge to keep enemy troops from crossing. Civilians escaping disastrous conditions in Kyiv began fleeing across the river beneath the remains of the bridge.

Kramarenko has helped ferry many of them safely to the other side.

“I chose a kind of profession that requires service to people,” she said. “I must help them save their lives.”

Read the whole story on the Washington Post site.