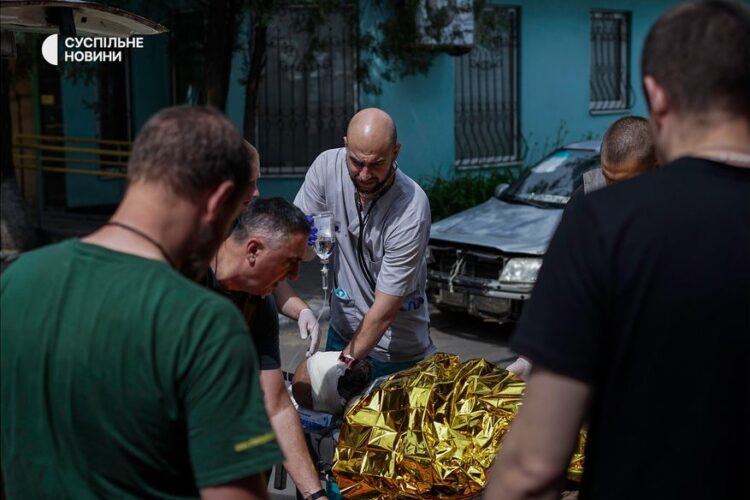 One part of the Suspilne Novyny project on doctors at war is dedicated to civilian medics stationed close to the frontline who save the lives of both soldiers and civilians, who are under incessant shelling in the active combat area. The story also features four PFVMH medics who tell about themselves and their work in the war, namely: Dmytro is a second-year intern surgeon who studies and works at the Disaster Medicine Department in Kyiv. On February 24, like many Kyivans, he was woken up by explosions and went to work through queues and traffic jams. Scheduled operations at the hospital were canceled, and in a week, when the wounded began flowing in, Dmytro helped with sorting and assisted in the operating room. When the situation in Kyiv became more or less controlled, he went to work in Slovyansk with the Pirogov First Volunteer Mobile Hospital. Vladislav, nom de guerre “Scythian,” works at the Kyiv hospital 7. He continued to receive patients there during the occupation of Kyiv Oblast and then went to Donbas. He says, had it not been for the war, he would have never thought about the army because discipline is not his “hobby.” Now he is learning new skills of working in an ambulance and serves “short” distances – transporting the wounded from the evacuation points to the hospital in Slovyansk. Olga has been living in Austria for 12 years and works there as an anesthesiologist and resuscitation doctor. She returned from abroad a few days after the full-scale invasion began. She says it felt as if she was a “tigress in a cage.” So she took a six-week leave, leaving her husband and dog behind in Austria. Bohdan Marchuk runs a “long” evacuation. He is a certified paramedic and also studies dentistry at a medical institute. When the new phase of the war began, he joined PFVMH and worked near Irpin and Borodyanka, helping evacuate civilians. Now he is in Donbas.