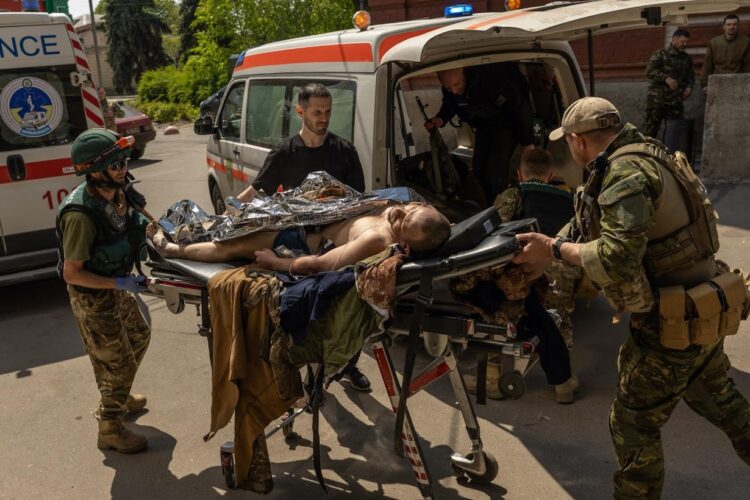 The Ukrainian government is jealous. And in this, it is similar to the “russian world,” which always looks askance at any grassroots initiative, any voluntary formations, any self-organization of citizens that is not sanctioned from above.

The Pirogov First Volunteer Mobile Hospital, like other volunteer organizations, was self-organized in 2014, when there was an extreme shortage of qualified medics at the front. Unfortunately, still not enough. Otherwise, our volunteer medics would not have provided care to five thousand wounded only in the last seven months of the war, since PVFMH moved its activities from Kyiv to Donbas, and later extended them to Kharkiv and Mykolaiv regions as well.

Just because of the lack of military medics at the front dozens of PFVMH doctors are saving the lives of our defenders at the front, side by side with their uniformed colleagues. They are in the hottest spots, having won love and recognition from the combat units of the Armed Forces of Ukraine, the National Guard and other defense forces. What’s more, they have earned the gratitude of the legendary AF Commander-in-Chief, who awarded more than fifty PFVMH members.

We ourselves find ambulances, state-of-the-art medical equipment, medicines, fuel, food, uniforms, and we repair our impressive fleet of vehicles ourselves. We did not ask the authorities for anything except for one thing – to preserve the mechanism of official secondment of volunteer medics to the front, which has existed since November 2016.

During the time of the Anti-Terrorist Operation (ATO), it was Health Ministry order #1254 dated 11/18/2016; during the time of the Joint Forces Operation (JFO), it was Health Ministry order #814 dated 04/27/2018. Both orders regulated the procedure for “secondment of medical and non-medical workers of health care facilities, enterprises, institutions and organizations at the disposal of the ATO/JFO Operational Headquarters, subject to their voluntary written expression of will within the framework of the project “The Pirogov First Voluntary Mobile Hospital,” in accordance with the procedure established by law.”

After the full-scale attack of the horde and the end of the Kyiv campaign, when problems began with the dispatch of volunteer medics to the front, I literally begged the Health Minister, Viktor Lyashko, to amend Order 814, adapting it to the conditions of martial law.

When informal attempts at communication failed, I formally approached the Minister in late July. In violation of all legal requirements, the Minister has not yet responded, although, apart from the official letter sent to the Ministry’s email address, I have duplicated my appeal via WhatsApp to the Minister personally.

However, on September 5, the Health Ministry of Ukraine, by its order #1597, approved “The procedure for sending medical workers on business trips, including scientific and pedagogical workers of higher (postgraduate) education institutions, rehabilitation specialists for the provision of medical and/or rehabilitation assistance.”

This order in essence repeats the provisions of orders #1254 of 2016 and #814 of 2018, but instead of ПДМШ, there appears the Health Ministry’s Ukrainian Scientific and Practical Center of Emergency Medical Aid and Disaster Medicine. What is also important: the new order of the Health Ministry does not refer to medical assistance at the front – only “about the dispatch of medical workers to institutions that need reinforcement, or during aeromedical evacuation.”

Despite the fact that order #1597 immediately made it difficult for our volunteer medics to go to the front, I intentionally took a break and refrained from publicly criticizing it to see how it would work in practice. Unfortunately, in the 2.5 months that have passed since then, I never met any medics of the Disaster Medicine Center at the front. Although the capacities of this budget-funded institution are incomparably greater than those of PFVMH. I meet volunteer Hospitallers Paramedics every time I go to the front, I see MOAS in hot spots all the time, I even often cross paths with Médecins Sans Frontières and the International Committee of the Red Cross in calmer places of Donbass. But I have not yet met the Disaster Medicine Center or its affiliated medics at the front. Please correct me if anyone has seen them.

Therefore, Health Ministry order #1597 of September 5, 2022, did not at all contribute to the strengthening of front-line medicine by civilian doctors, at the same time creating serious problems for the work of PFVMH, which has been strengthening this front-line medicine for the eighth year in a row. More and more often, referring to this order, hospital managers refuse to send civilian volunteer doctors to provide medical assistance to our soldiers as part of the Pirogov First Volunteer Mobile Hospital. There are heads of medical institutions who bluntly tell medics preferring to spend a month at the front with the PFVMH team: quit and go wherever you want. Some potential volunteers were even deprived of bonuses and allowances just because we appealed to the chief doctors of their hospitals with an official request to send the doctors to the front for a month.

Thank God, the absolute majority of medical facilities in Ukraine are not directly subordinated to the Health Ministry and their patriotic leaders continue to let their subordinates go to save lives at the front at their peril and risk. Therefore, despite Minister Lyashko’s deafness to our requests, the Pirogov First Volunteer Mobile Hospital is not only still working, but also expanding his presence at the front.

However, I repeat that it is becoming more and more difficult to engage volunteer doctors to save lives at the front lines. There is no shortage of volunteers – there is a lack of political will on the part of the authorities to create a legal framework for the official involvement of those willing to provide medical care at the front lines. Unable to cope with the flow of wounded, the authorities did everything to prevent civilian medics from shouldering their military colleagues. At least officially, without quitting and not at the expense of annual leave (which only happens once a year).

Despite all the obstacles, we will continue to save lives at the front as long as there are enough strength, health, material resources and medical volunteers willing to risk everything to save others. But I want Ukrainians to know: part of our wounded defenders could be saved if the Ukrainian authorities and their individual representatives were not so jealous of those who organized themselves without their help, independently find resources for their activities and call things by their own names.

Remember, Ukrainians are being killed at the front and in the rear by Russians led by Putin. But the Health Minister of Ukraine, Viktor Lyashko, prevents medical volunteers from rescuing our defenders. If the Pirogov First Volunteer Mobile Hospital will be forced to reduce our presence at the front, now you know the name of the politician who did everything in his power to make this happen.

In conclusion, I will just remind you, Mr. Minister: PFVMH survived eight heads of the Health Ministry – we will survive you too! But the unsaved lives of our defenders will forever remain on your conscience.