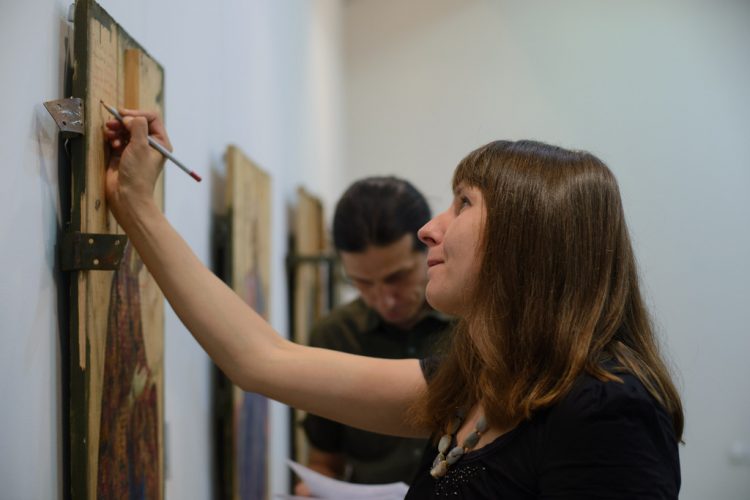 The International Institute for Cultural Diplomacy has nominated works by Kyivan artists Sofia Atlantova and Oleksandr Klymenko from their Ilovaysk Deisis series for the Shevchenko National Prize of Ukraine.

The Ilovaysk Deisis series is a part of the large-scale Icons on Ammo Boxes art project, a joint project with the Pirogov First Volunteer Mobile Hospital. The 13 works of the series are dedicated to the tragic developments in September 2014 near Ilovaysk, when Ukrainian troops suffered heavy losses in the battle against Russian aggressors. According to the nomination paper, Ilovaysk Deisis is one of the first attempts in Ukrainian art address this tragic theme.

As authors of the works explain, Deisis – supplication in Greek – in iconography is the representation of Christ Pantocrator as the Judge at the Last Judgment accompanied by saints facing Him in a prayer on behalf of humanity. So Ilovaysk Deisis is a present-day interpretation of this iconographic composition. In this case, the saints are supplicating in the first place on behalf of the Ukrainian warriors killed in the Ilovaysk Pocket.

In the last two years, works of the “Icons on Ammo Boxes” project were exhibited in dozens European cities and institutions, including the European Parliament and the Lithuanian Seimas. The project has already raised over UAH 2 million, which the authors have given the PFVMH to save lives and health of our fellow citizens. In this way they have been realizing in practice the main idea of the project: the transformation of death into life.