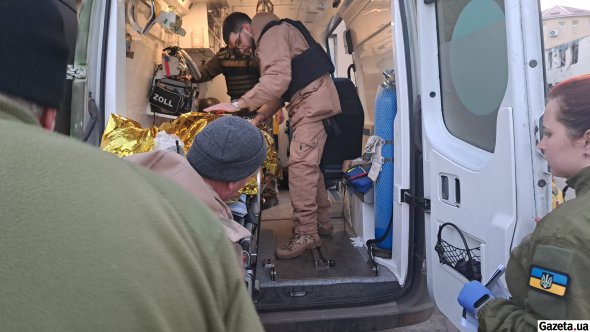 On the brink of life and death: how Ukrainian wounded are saved in Lyman under “Grads” and “Uragans”

More than 800 medics of the Pirogov First Volunteer Mobile Hospital helped thousands of people during the eight years of the unit’s existence. They saved wounded Ukrainian soldiers and civilians.

Currently, PFVMH medics continue to serve in the hottest areas of the front. They evacuate the wounded, stabilize their condition, transport them to hospitals in the rear cities of Ukraine, in particular, Slovyansk and Kramatorsk in Donetsk Oblast.

PFVMH is a cross-section of the entire medical community of Ukraine. Everyone who has the opportunity and skills to save people voluntarily serves here: from ambulance drivers and young medical interns to chief doctors and respected teachers of leading universities.

The history of the volunteer unit began in 2014. The first missions of volunteer medics were in the Anti-Terrorist Operation zone. There they not only provided assistance to our soldiers, but also taught them tactical medicine. Gradually, more and more people learned about PFVMH among the medical community. The unit was replenished with new and new volunteers.

With the beginning of the full-scale war, PFVMH medics actively worked in the Kyiv and Zhytomyr regions, and since May they have focused specifically on Donbas and the southern direction. From that moment, began keeping statistics. It is impressive: in a few months, doctors provided assistance to more than 5,000 seriously injured people. Of these, 1,990 patients were admitted in November alone.

Currently, the volunteer medics work in Donetsk Oblast – in the village of Zarichne, the cities of Sloviansk, Chasiv Yar, Bakhmut and Lyman. Gazeta.ua journalists visited Lyman at the beginning of December to see how Ukrainian defenders are saved there and hear stories of volunteer medics.

Read the whole story on the Gazeta.ua site.