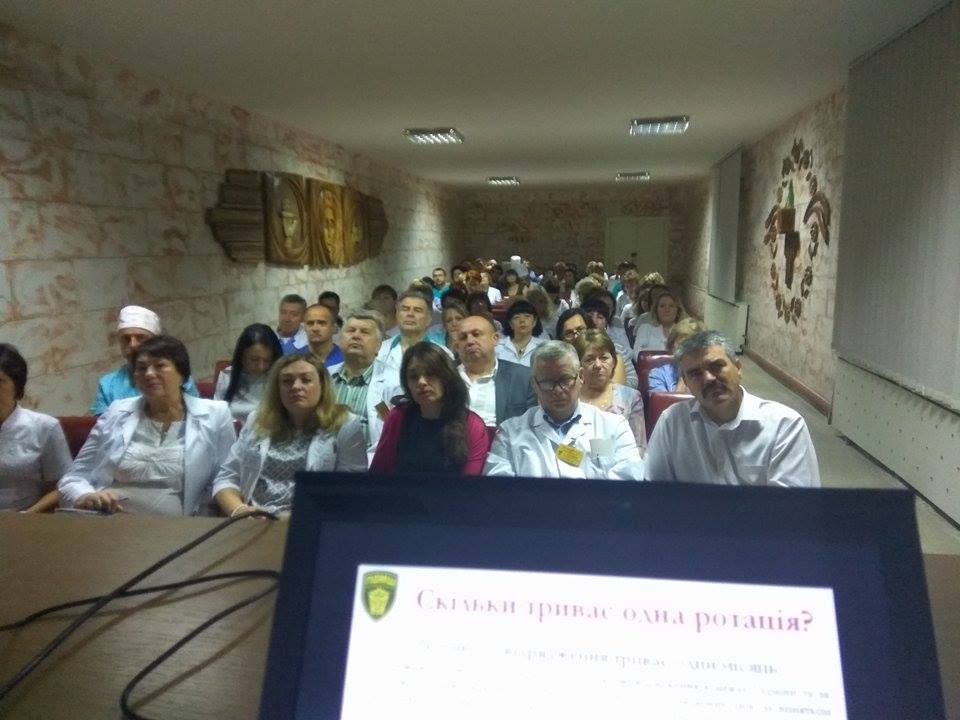 Yesterday, the Pirogov First Volunteer Mobile Hospital was once again presented in the Rivne Oblast, this time in its capital. PFVMH President Gennadiy Druzenko and Vice President for Logistics Ihor Buyvol met with staff of the Rivne City Hospital and the Rivne Oblast Clinical Hospital. They told about the PFVMH, its legal framework and its achievements, as well as conditions for volunteers to participate. According to Druzenko, each of the presentations was attended by over 100 medical workers and a several media people. The volunteer hospital had been presenter in Rivne Oblast last time less than a month ago – in the Rivne Oblast Hospital for War Veterans, which is located in Klevan. Why come back to the oblast so soon? “We looked at the statistics on our ‘Angels in Scrubs’ map and saw a certain gap: there were just five volunteer medics from Rivne Oblast, whereas twice as many from neighboring Volyn, more than trice as many from Khmelnytsky Oblast, and almost five times as many from Lviv Oblast. Knowing that Rivne Oblast is a patriotic region with a good medical potential, we decided that lack of information was the reason for this gap,” Druzenko explained.

He thanked for support the Rivne Oblast State Administration’s Health Department, which the PFVMH had asked to assist in organizing the presentations. “In particular, the deputy head of the Health Department, Vasyl Vysochansky, helped us. By the way, his son has been fighting in Eastern Ukraine for the third year now. Mr. Vysochansky promptly arranged two wonderful opportunities for us to meet with medics of Rivne’s two largest health care institutions,” the PFVMH leader said.

After the PFVMH presentations in Volyn Oblast and Klevan on Aug. 16-17, six medics from Volyn Oblast have filled out the online enrolment form and only two from Rivne Oblast.