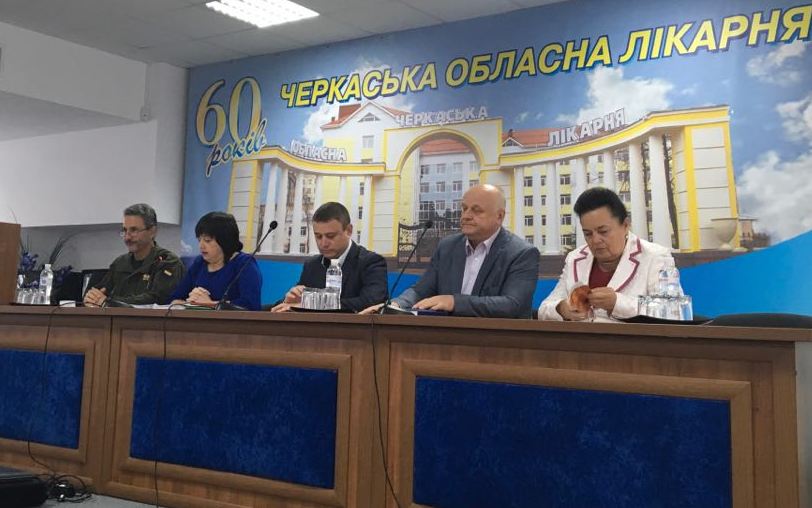 Yesterday and today, Pirogov First Volunteer Mobile Hospital President Gennadiy Druzenko continued his promo tour of Ukraine with PFVMH presentations in Cherkasy and Kamyanets-Podilsky. In Cherkasy, the presentation was delivered during a collegium session of the Oblast State Administration’s Health Department, and in Kamyanets, within the framework of the XVI Congress of the All-Ukrainian Society of Physicians. The PFVMH leader told the audience about the mobile hospital, its legal framework and conditions for volunteer medics’ participation.

During the presentation in Cherkasy to about 80 representatives of the oblast’s health care institutions, Cherkasy Deputy Governor Yaroslav Berezan handed Presidential Badge “For Humanitarian Participation in ATO” to two PFVMH veterans: surgeon Volodymyr Kozlovsky, Deputy Head Physician of the Smila Central District Hospital, and anesthesiologist Stanislav Scherbyna, Head of the Resuscitation Department in the Cherkasy Oblast Psychiatric Hospital. In addition, Kozlovsky received from the PFVMH a Golden Scalpel “Honor and Respect” with his name engraved on its handle. Among half a hundred delegates from all Ukrainian regions, the AUSP Congress in Kamyanets was also attended by another PFVMH volunteer – Serhiy Sivak, doctor at the Volyn Oblast Clinical Hospital’s Anesthesiology and Intensive Therapy Department. According to Gennadiy Druzenko, after his presentation the AUSP promised to spread information about the PFVMH using the society’s own information resources.

The PFVMH leader actively promotes the mobile hospital, in particular among the Ukrainian medical community. In the last three months, he has delivered over 10 presentations in eight cities and also had numerous appearances in electronic and printed media. Is there any effect of this activity? We have analyzed the dynamics of online enrollment from July 3, when the new enrollment form was introduced. The findings are shown on the chart. Already in August the number of medics willing to become volunteers nearly tripled against July, and it has continued growing in September. (Of course we do not expect permanent geometric growth.) Notably, after presentations, an increase in the proportion of potential volunteer medics is observable just from the regions were the presentations were held.