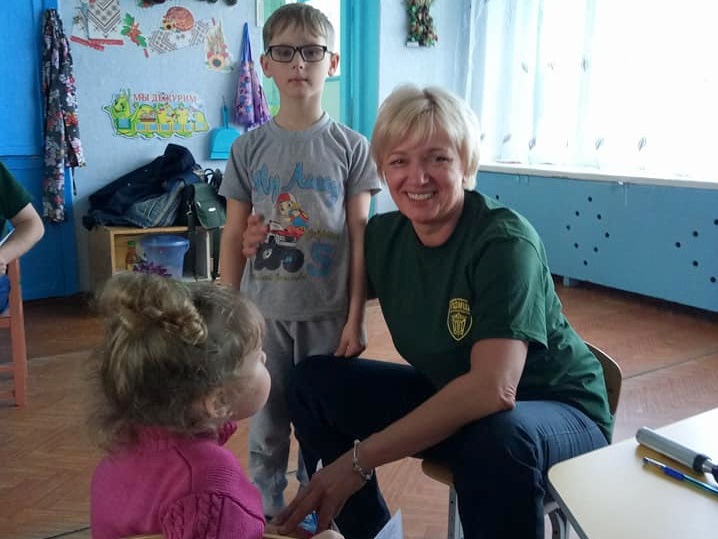 This week Monday to Friday, a specialized team of nine doctors from the Pirogov First Volunteer Mobile Hospital works in Rubizhne, Luhansk Oblast, to carry out preventive examinations of local children. National Children Specialized Hospital “Okhmadyt” and medical network “Dobrobut” surgeon Serhiy Petryk, who was the spearhead of the PFVMH’s pediatric “landing parties,” says the volunteer medics in two days have already surveyed about 400 kids in six preschools and four general education schools. He also says the target for this mission is a total between 800 and 1,000 young Rubizhne residents.

The traditionally high level of expertise of PFVMH teams, the specialized parties in particular, this time was reinforced even more by the presence on the team of the Health Ministry’s Chief Ophthalmologist – Prof. Oksana Vitovska, MD, chair of ophthalmology at the Bohomolets National Medical University and Honored Physician of Ukraine. Ms. Vitovska participates in the preventive examinations like any other team member and also manages to exercise her administrative functions of the country’s chief ophthalmologist, familiarizing herself with the condition and problems of the region’s ophthalmologic service (An interview with Vitovska is to be published soon.)

According to Serhiy Petryk, seven other doctors came to Popasna besides him and Oksana Vitovska. Five of them have already participated in such “landing parties” before: otolaryngologist Yaroslava Avhustynovych, stomatologists Andriy Kukulyak and Maksym Makarenko, pediatrician Serhiy Maksymov and surgeon Oleksiy Holubenko. They were joined by two PFVMH “freshers”: neurologist Yaroslav Kryshtofovych and pediatrician Maryna Dyachenko.