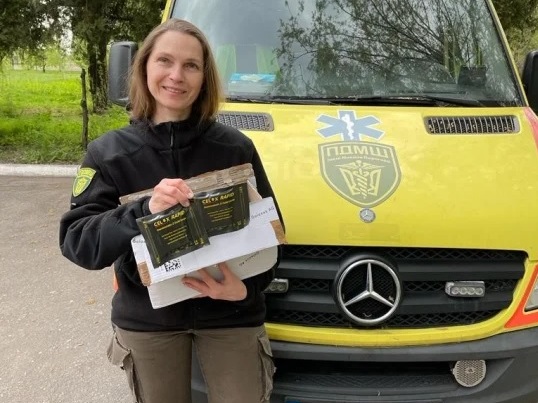 “Rules do not apply in this war” – Svitlana Druzenko

Medical evacuation coordinator Svitlana Druzenko, who rescues the wounded on the line of contact, told NV how the mobile hospital functions under shelling.

Currently, PFVMH has a lot of work in the country’s east: the hospital’s medics go to the sites of rocket attacks and are on duty close to the contact line – to intercept and stabilize the most difficult patients, who are then transported to medical facilities in large cities.

“Originally, we planned to work with the wounded from the ‘red’ zone, operating from the ‘yellow’ or ‘green’ one. But now any place in the east can be ‘red.’ For example, Slovyansk, where we work and which is shelled every day; or Chasiv Yar: when rockets hit the residential area, we were on duty right there near that house, taking the wounded. Things like that have happened more than once, so we can say that we willy-nilly get into the ‘red’ zone and take people out of there,” explains Svitlana.

She says that the PFVMH has several schemes for different cases. In the case of an urgent call from the military, who are already transporting a wounded soldier, volunteer medics pick him up right on the road. And there can be a makeshift collecting point, where a PFVMH ambulance is on duty and where the military brings the wounded. “A narrow circle of people usually knows about this point, and we have to constantly change the location. Once, during such duty, our crew changed its location three times, because it constantly got under air attacks. We also had to camouflage all the ambulances because the rules don’t apply in this war, and medics are the enemy’s #1 target. Therefore, at such a point you have to additionally hide the vehicle so that it is invisible to enemy drones, which record everything and can adjust the fire,” says Svitlana.