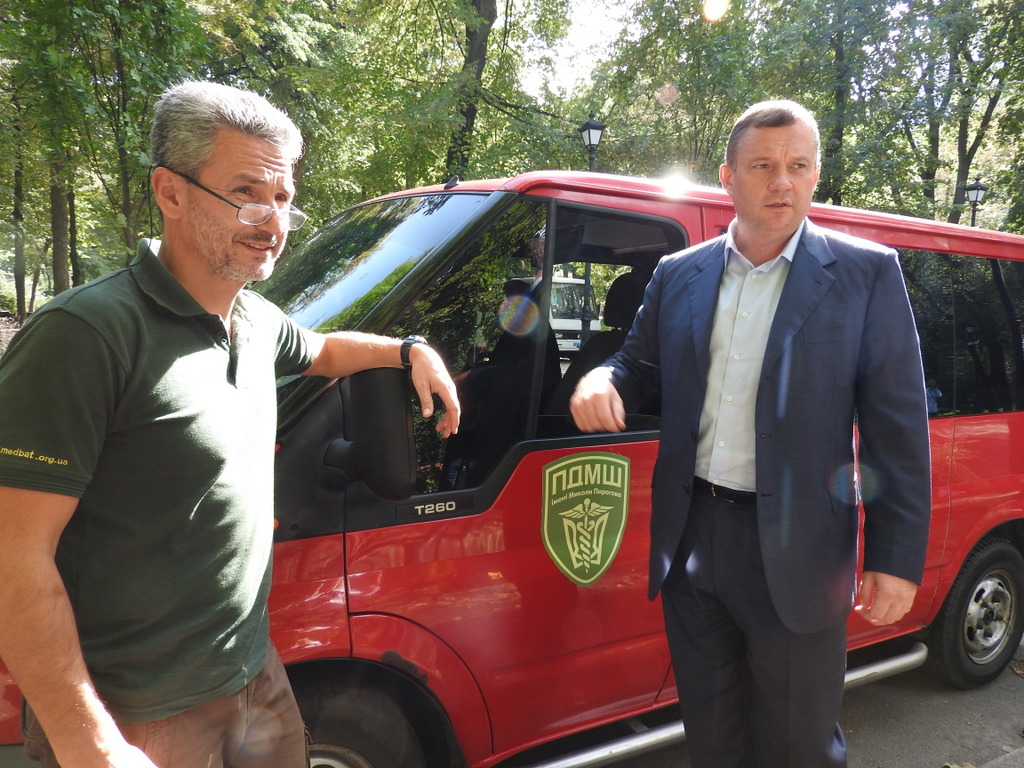 Yesterday, MP Yaroslav Dubnevych gave the Pirogov First Volunteer Mobile Hospital a Ford Transit van he and his brother Bohdan, also an MP, had specially bought for the hospital. The PFVMH will use the van to deliver volunteer medics to Eastern Ukraine to work in monthly missions and special parties of the mobile hospital.

While symbolically handing the vehicle keys and license to the new owners, Yaroslav Dubnevych said, “I’m happy today that we are giving this vehicle over for hauling PFVMH doctors, so that they will arrive in the combat area timely and will be able to get comfortably to the places of their duty.” He also mentioned that the van is a personal gift from the Dubnevych brothers, not from their charity foundation, which collaborates with a variety of humanitarian organizations.

Gennadiy Druzenko explained that the van, in the first place, will be a backup for, and eventually replace, the Mercedes Vito that currently transports doctors but has “ruined its health” on the near-the-front roads. “And second, it’s just an ideal vehicle for our medical parties: load doctors, go, get the work done and come back. Makes our mobile hospital even more mobile,” the PFVMH leader said.

Yaroslav Dubnevych also told that their assistance to the mobile hospital began about a year ago with a Facebook post in which Gennadiy asked his friends to help solve a train tickets problem for PFVMH doctors to leave for Eastern Ukraine. “I intervened and we jointly solved this little problem,” Yaroslav said. “Then we more than once met and discussed issues of PFVMH logistics. The transfer of this vehicle is a result.”

Asked why the Dubnevych brothers decided to assist the PFVMH, the MP answered, “I heard a lot of good references about PFVMH doctors when I was in the Anti-Terrorist Operation zone. So having read about the hospital and having talked with its leader Gennadiy, we decided to open one more line in our activities – support of medics in this good great cause: saving the lives of our warriors.”